UN experts call for an investigation after the Saudi crown prince is implicated in a hack of Amazon CEO Jeff Bezos'‚Ätwitter.com/i/web/status/1‚Ä¶3L 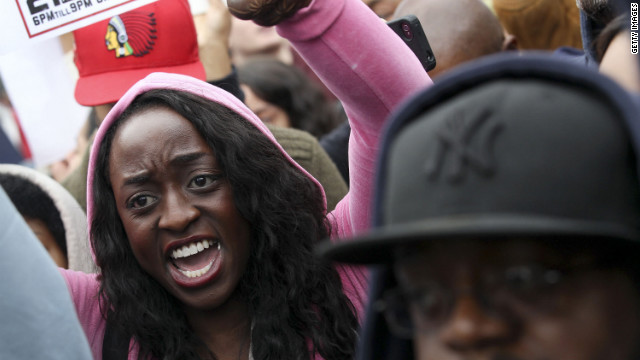 A month ago Monday, Trayvon Martin, an unarmed Florida teen, died at the hands of a neighborhood watch volunteer, stirring outrage and protests nationwide.

The African-American teen was fatally shot on February 26 as he walked to his father's fianc√©e's house in Sanford after a trip to a convenience store. Neighborhood watch volunteer George Zimmerman told police he shot the teen in self defense, and he has not been charged.

The 17-year-old's death fueled calls for justice nationwide that continue to grow daily. On Monday rallies are planned from coast to coast to pay tribute to Martin or bring attention to the issue. Below is a list of some of the largest planned rallies.

iReport: Why you marched for Trayvon

Roland Martin will be hosting a town hall put on by the¬ÝPaul C. Perkins Bar Association, in conjunction with the family and representatives of Trayvon Martin.

The forum is being held prior to the National March for Justice on March 26. The event begins at noon at the Macedonia Baptist Church in Eatonville, Florida. Members of Trayvon Martin's family as well as their attorneys will be present along with¬Ýstate Representative Dwayne L. Taylor (D-Daytona Beach), NAACP Florida President Adora Obi Nweze, and Jerry Girley, president of the Paul C. Perkins Bar Association.

Details: A¬Ý"Rally for Justice" that will be held at the Academic Mall, the main lawn on campus, to seek justice for Trayvon and all others who have been racially profiled or stereotyped, according to the student group organizing the rally.

"Please join the Black Graduate Student Organization at Carnegie Mellon University as we rally for justice and remembrance of Trayvon Martin," a note on the group's Facebook page says. "This event is open to the public and all university students in Pittsburgh. We seek justice, not only for his family and friends, but in honor of all racially profiled, stereotyped, and unjustly convicted citizens of this country, whose voices have long been suppressed and whose lives are often subject to overt discrimination and criminalization in a biased justice system. We are Trayvon."

The is touted as a "scream-out" because the organizers say at this point speaking out is not enough.

"This event is in solidarity with families and advocates in Florida who will be holding a rally for Trayvon Martin on the same day," according to a Facebook event page created by¬ÝPOOR Magazine and the Prensa POBRE & Idriss Stelly Foundation, which are sponsoring the event.

The rally will take place at the¬ÝHall of Justice in San Francisco.

"Stand in Solidarity with forces around the country & let your voice be heard," organizers said. "Come out and put pressure on the U.S Dept. of Justice to prosecute George Zimmerman for the murder of Trayvon Martin."

A rally at the school will be held to draw attention to Martin's case.

"You know it's the pursuit of justice," Cutkelvin said. "It's not about color, it's not about race. It's the simple fact that, you know a situation happened, and the truth hasn't been told."

The City of Sanford is asking for civility and calm during the City Commission/Town Hall Meeting for Trayvon Martin. Martin's family will address those assembled during the meeting.

A large crowd is expected to head to Georgia's state capitol for an "I am Trayvon Martin" march where student activists from several colleges as well as civil rights leader will focus on the need to take a long look at Florida's "Stand Your Ground" law.

"In Atlanta, birthplace of Dr. Martin Luther King, cradle of the American civil rights movement and home of the largest concentration of historically black colleges in the country, the tragedy of the 17-year-old Sanford, FL black male has struck a strong chord," a press release for the event said.

The event is expected to be attended by "Atlanta residents, student activists from Clark Atlanta University, Morehouse College, Spelman College, Georgia State University, and other local schools; along with various celebrities, public officials, clergy and members of the local NAACP, National Action Network, Black Law Students' Association, Rainbow PUSH Coalition, Concerned Black Clergy of Atlanta, the Occupy movement, and other local, regional and state-wide organizations," according to the release.

Indiana residents are planning a march that will begin at Crispus Attucks High School and continue throughout the city.

The Baltimore Chapter of the Southern Christian Leadership Conference and the All Peoples Congress will be hosting a march as well as a "Speak Out" and vigil in Martin's honor. The group will march towards the Baltimore police headquarters and end with a vigil and rally.

"March participants are encouraged to wear hoods in solidarity with Trayvon Martin to take a stand against racial profiling," a press release for the event states.

Organizers of this event are asking residents to "stand in solidarity" with Martin's family and demand justice in the case. They will¬Ýbe¬Ýhaving a vigil for Martin and hosting an open mic event.

A rally is planned to show support for Trayvon Martin and will include a moment of silence, as well as those speaking out on their feelings and sharing their own experiences.

"A black person in a hoodie isn't automatically 'suspicious,'" leaders of the event say. "Let's put an end to racial profiling! Trayvon was walking home from buying Skittles at the local store, so we encourage you to bring some Skittles with you as well!"

Those organizing the "Justice & Peace" include a¬Ýcoalition of Detroit's Civil Rights, labor, clergy and community leaders.

The leaders say they are "rallying for justice in what they call the racially charged murder of Trayvon Martin in Florida."