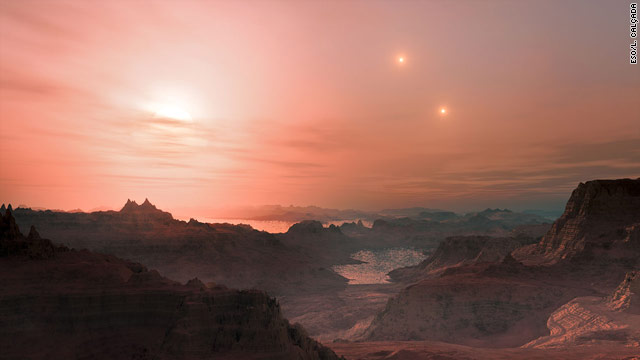 CNN's Light Years blog always seems to be addressing some of life's biggest, most perplexing and indeed thorniest questions. Our readers often go there to debate grand themes and ponder the meaning of the universe.

Astronomers have estimated that in our galaxy, there are tens of billions of rocky planets not so much bigger than Earth that could be candidates for harboring life.

It follows that many would ask whether there is life on other planets. Readers have varied views on this.

Etheras: "Life as-we-know-it is unlikely to be plentiful. ... If you keep adding-on all the vital elements to the evolution of life as-we-know-it (the only life we can say for sure exists) it becomes increasingly plausible that life (at least 'complex life') in the universe is very rare. Its just a numbers game. So why do scientists constantly talk about life on other planets? Money. They want headlines because headlines means publicity which means grants. They're telling people what those people want to hear, because if they didn't people wouldn't give them money. Now ... I'm not saying life doesn't exist on other planets. I am saying that, its more likely than not, humankind will never find another intelligent civilization, even if we could colonize half the galaxy. Sorry chums, we're alone."

Brandon T: "As an astronomer studying exoplanets, there are still too many unknowns to even consider evaluating the possibility of life on other planets. Viewed statistically, however, it is EXTREMELY unlikely that the only planet known to harbor life would ultimately involve life intelligent enough to ask this question. Therefore, it's likely that there are many planets out there with non-intelligent life, at the very least."

2. Can religion and science coexist?

Stories about research into human origins often give rise to debates over evolution, creation, science and religion.

The discovery of a partial foot fossil in Ethiopia suggests that our human ancestors were possibly an occasional tree-climber and an occasional upright walker.

Some of our readers expressed feeling a strong sense of inner conflict.

syz: "Why all three holy books have written that human were created by God? Currently I am in a dilemma. I know evolution is true, that means Bible is false. But if I am Christian, are you telling me not to read the Bible? How can we practice science and read Bible same time? Is that possible? Do I have to be atheist to believe in evolution? Unless the scientists can answer this question, i.e. the question whether God exists or not, the Bible will remain and will prevail among all."

Steffan: "I too have been conflicted with a mesh of science and faith. Basically, time has always been a work in motion. Time as it is now was formalized not too long ago. Who is to say how long a day was back then? See the point? When you take all that into consideration, it's certainly plausible."

Dan: "Do you think God wants us to be able to prove that he exists? I think not –- any idiot (or at least most of us) will believe something that can be proven. It is called belief for a reason? I believe in God, if you require proof, you are in the wrong business; you believe the Bible to be true and yet then cite that as proof that God exists? The Bible contains great truths it is not literal truth, i.e. factual. Science does not require the truths contained in the Bible or in religion in general to be false, just not literally true."

3. What's our place in the universe?

This question may be the most challenging to answer of them all. Several comments in one Light Years/Geek Out! post have referenced this idea.

The Allen Telescope Array is a collection of small satellite dishes that can simultaneously pick up signals for radio astronomy research. A woman named Jill Tarter wants to have humans analyze the signals the array sends back in real time, a task that current machines can't do. The more eyes and ears, the better chance of finding evidence of intelligent life.

Our readers from Light Years often talk about the purpose of science and space exploration. What drives us to look up at the stars? Is space travel worth the effort? Here's what two readers had to say.

RMc: "As sure as I am here (pinch), they are out there. If humanity wishes to conquer the stars, we must get off this rock. There will come a day that we harvest planets like we harvest a crop. It's sad to see us fighting over a speck of sand amongst a cosmic sandbox. Just because we are small doesn't mean we have to think small."

iBod: "Very good thought. I wish to see the day we land on Mars. I am only 19, so maybe by then - 10 to 30 years down the line - I'll be sipping a Pina Colada on old Luna watching them. LOL! Thinking in that context, you realize, we are only getting started."

But here's what another reader opined, in explaining why they feel a sense of doubt about SETI's efforts to find intelligent life.

MrHanson: "Exercise: Think of an experiment that would be very expensive, with a very low probability of success that might take decades or centuries, but, if successful, would reveal something interesting. Create a list of selling points on why private foundations or governments should fund your experiment, but be honest: tell them 'You can think of lots of ways that this experiment wouldn’t work.' Practice your spiel with all the emotive power you can muster, and see if you can convince a friend."

Do you have any answers to these questions, or even more questions you want to ask? Share your opinion in the comments area below and in the latest stories on CNN.com. Or sound off on video via CNN iReport.