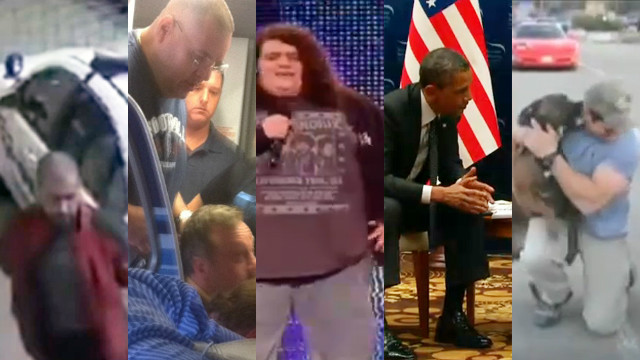 The most watched video on CNN.com this week was the surveillance video of George Zimmerman in handcuffs after the Trayvon Martin shooting. Following as the second most popular video was a firsthand account of the erratic Jet Blue pilot who was subdued by passengers. Rounding out the top five are a heart-warming reunion between a soldier and an excited dog, a teen signing sensation, and finally, an open mic mishap from President Obama. Check out the videos below and see what everyone else was watching this week on CNN.com.

Zimmerman in handcuffs night of shooting

Police surveillance video shows George Zimmerman arriving at the police department in handcuffs on the night of the Trayvon Martin shooting. Watch the video to decide for yourself whether Zimmerman appears to be injured.

A woman describes her experience aboard a Jet Blue flight where the pilot lost control and had to be subdued by passengers. Click below to hear what she heard the pilot saying as he lost it on the flight.

A dog can't contain himself after being reunited with his owner, a soldier returning home from Afghanistan. Watch the boxer's uncontrollable excitement in this adorable reunion.

Jonathan Antoine's booming opera voice leaves judges on "Britain's Got Talent" pronouncing him the next Pavarotti. Listen for yourself and decide whether or not this teen phenom is the next Susan Boyle.

An open mic catches President Obama seeking help from Russia's outgoing president for NATO's missile defense. Watch the video to see what Obama was talking about when he thought no one was listening.

Ashton Kutcher and Mila Kunis say they don't believe in bathing their kids or themselves too much. "If you can seeŌĆtwitter.com/i/web/status/1ŌĆ”vM
cnni

9:53 pm ET August 1, 2021 RETWEET
This house on Argentina's Atlantic coast collapsed into the ocean. Argentina is one of the many countries facing riŌĆtwitter.com/i/web/status/1ŌĆ”Pd
CNNweather