A twin-engine plane carrying 43 people crashed upon takeoff in Siberia on Monday, killing all but 11 people on board, Russia's RIA Novosti news agency said.

The plane had taken off from the city of Tyumen and traffic control lost contact with it immediately afterward, the news agency said.

The ATR-72 plane was carrying 39 passengers and four crew members.

Thirty two of them died, including all four crew members, the news agency said.

The 11 survivors were in intensive care, RIA-Novosti said.

Authorities could not immediately say what caused the crash. Officials have recovered the plane's data recorders, which will help shed light on what happened in the flight's final minutes. 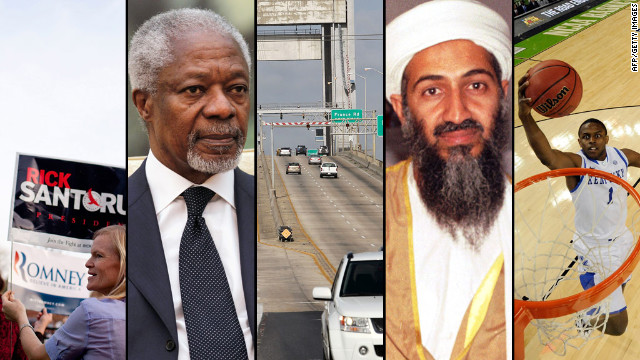 Mitt Romney could pass the halfway mark for the delegates he needs to earn the GOP nomination for president when Wisconsin, Maryland and Washington, D.C., hold their primaries on Tuesday.

An NBC/Marist poll released Friday showed Romney had a 40% to 33% edge over Rick Santorum in Wisconsin, with Ron Paul at 11% and Newt Gingrich at 8%.

On Saturday, CNN estimated that Romney had 571 delegates, with Santorum at 264, Gingrich at 137 and Paul at 71. A candidate needs 1,144 to clinch the GOP nomination.

Romney recently picked up the endorsement of one of Wisconsin's most prominent congressmen, House Budget Committee Chairman Paul Ryan.

Ryan has argued that the GOP presidential race would essentially be over if Romney wins all three contests on Tuesday, saying it'd be too difficult for Santorum to find enough delegates the rest of the way to win the nomination outright.

Santorum wouldn't say Friday whether Tuesday's contest is his last stand but did say he intended to "take this all the way." Gingrich has said he wouldn't drop out unless Romney gets enough delegates to clinch the nomination and has indicated he would fight for the nomination in an open convention if Romney doesn't get the clinching number by the time the GOP primaries end in late June.

Cops convicted in post-Katrina shootings case to be sentenced

Five current or former police officers found guilty of civil rights and other violations tied to fatal shootings on New Orleans' Danziger Bridge in the chaotic aftermath of Hurricane Katrina are scheduled to be sentenced Wednesday.

Prosecutors said some of the officers opened fire on an unarmed family, killing 17-year-old James Brissette and wounding four others. Minutes later, one of the officers shot and killed Ronald Madison, a 40-year-old man described by U.S. Justice Department officials as having severe mental disabilities. Madison was trying to flee the scene when he was shot, according to the Justice Department.

Officers Kenneth Bowen, Robert Gisevius, Robert Faulcon and Anthony Villavaso were convicted in the shooting along with a fifth defendant, former detective Arthur Kaufman, who was accused of helping the officers cover up the incident.

Syria last week signed off on the plan from Annan, the U.N.-Arab League special envoy to Syria. However, Syrian President Bashar al-Assad demanded that those battling his regime pledge to stop their violence too.

Annan's terms of the peace plan included an end to all violence by the government and opposition, the delivery of timely humanitarian aid, the release of arbitrarily detained people, freedom of movement for journalists, respect for peaceful demonstrations and freedom of association.

The United Nations estimates at least 1 million have been affected and more than 9,000 have died since the unrest in Syria began a year ago. Opposition activists put the death toll at more than 10,000 people.

In Turkey over the weekend, leaders from around the world met to discuss ways to ramp up pressure on al-Assad's regime. The United States vowed to nearly double its funding to the Syrian opposition, but a Syrian opposition leader called on the international community to do more.

Widows of bin Laden to be charged

Three widows of the late al Qaeda leader Osama bin Laden will be charged Monday with living illegally in Pakistan, a source familiar with the case told CNN. If convicted, they could face a maximum sentence of 10 years in prison.

The women were arrested after U.S. Navy SEALs killed bin Laden during a raid on his compound in Abbottabad, Pakistan, in May.

The three have been in Pakistani custody since the raid. Pakistani authorities have started legal proceedings against the widows, alleging forgery and illegal entrance into Pakistan.

Sports fans have plenty to hold their attention this week, starting with the NCAA men's basketball title game between Kansas and Kentucky.

The game is a rematch of the teams' early season meeting, which Kentucky won 75-65 on November 15. Kansas star Thomas Robinson said he was disgusted with himself after that game, in which Kentucky's underclassmen-led team held the junior power forward to 11 points. He is relishing the chance to make amends on Monday, SI.com's Luke Winn writes.

On Wednesday, Major League Baseball will have its stateside opening night, with the defending World Series champion St. Louis Cardinals visiting the Miami Marlins in Miami's new ballpark. It won't be the first game of the season, though - that honor belonged to the Seattle Mariners and Oakland A's, who split a two-game regular season series in Japan last week.

Thursday kicks off the Masters, seemingly good timing for Tiger Woods, who last week won his first PGA Tour event in 30 months. Woods, looking for his fifth Masters victory and his 15th major title (he's currently four away from Jack Nicklaus' record of 18), dominated at Bay Hill last week and may be signaling that he is the man to beat at the Masters, SI.com's Damon Hack writes.