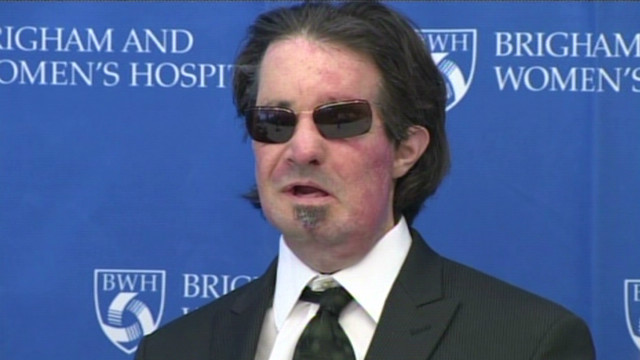 “I go out all the time with my family, my friends, my little girl. I don't to worry about what anyone else is going to think," said 26-year old Dallas Wiens, the nation's first recipient of a full facial transplant.

In 2008, Wiens' head hit a high-voltage electrical wire in Fort Worth, Texas, leaving him without any facial features. Monday marks the first anniversary of his life-changing facial transplant operation at Boston’s Brigham and Women’s Hospital.

Take a look at how Wiens looks now and how he feels about life after surgery.

One year ago, a team of nearly 30 doctors in Boston performed a 17-hour surgery on Dallas Wiens. The full facial transplant recipient said the best part of life after surgery is his renewed relationship with his daughter.

Dallas Wiens' story comes just days after an extensive face transplant at the University of Maryland, where 37-year-old Richard Lee Norris is now recovering. The Virginia man was injured in a gun accident and had been wearing a mask for years to cover his facial injuries.