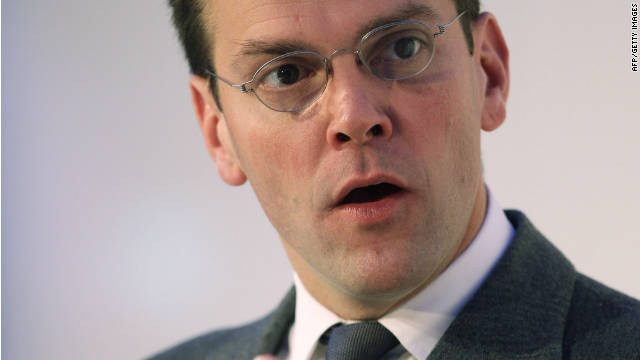 James Murdoch stepping down as chairman of UK broadcaster BSkyB

James Murdoch, the son of media magnate Rupert Murdoch, is expected to step down as the chairman of BSkyB on Tuesday, a longtime institutional investor in the British satellite broadcaster told CNN.

Sky News, which is owned by BSkyB, also reported that Murdoch was resigning from the post, citing unnamed sources.

The move would come on the heels of James Murdoch's resignation from News Corp.'s British newspaper publishing companies in the wake of scandals over the past year.

Before the hacking scandal, James Murdoch was widely regarded by media watchers as the heir apparent to his father Rupert's powerful empire - a remarkable turnaround for a college dropout once viewed as the family's black sheep.

As its deputy chief operating officer and head of international operations, Murdoch, 38, was the third most senior figure at News Corp., wielding considerable influence through the stable of newspaper titles at his command.

Murdoch finally succumbed to the turmoil that threatens to engulf the entire company, even after it stepped away from a controversial bid to acquire full control of its UK-based broadcasting arm, ending for now any possibility of him succeeding his father at the helm of one of the most powerful media empires in the world.