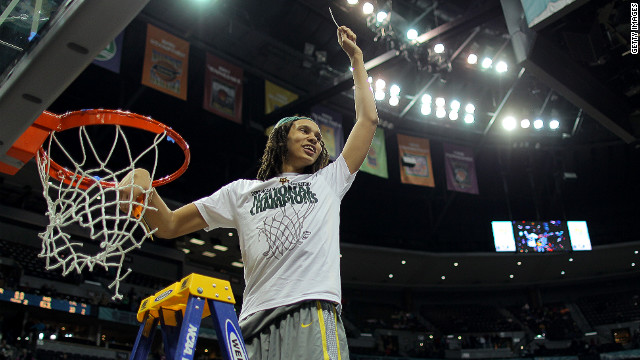 If she hadn't made the point already that she and the Baylor Lady Bears were the queens of women's hoops, Brittney Griner left no doubts Tuesday night.

With their 80-61 win over Notre Dame, the Bears did the unprecedented, winning 40 straight games in a season and planting themselves firmly in the debate over which is the best women's college team ever. In a game that was close before the Bears shredded the Fighting Irish 46-33 in the second half, Griner filled the stat sheet as she's done all season.

Playing all but one minute, the Naismith Trophy winner tallied 26 points, 13 boards and five blocks. Oh, and she tossed in an assist for good measure. Her shooting percentage in the second half? A lights-out 89%.

While all the talk after the men's championship revolved around the next level - who's going to the pros, who's staying for another year - Griner, a junior, has insisted she will forgo making upwards of $1 million, a fortune in women's hoops, to play for the Lady Bears her senior season. Yes, even if Baylor won the championship game, she has said.

The Lady Bears' performance made them only the 10th women's team to run the table since 1972, when the tournament era began.

Now, undefeated seasons in women's hoops aren't the shooting stars they are in the men's game. The Connecticut Huskies' women's team went 39-0 in 2002, 2009 and 2010, whereas the last men's team to run the table was the 1976 Indiana Hoosiers.

Coach Kim Mulkey, who never sat during the game despite battling Bell's palsy over the last week, said she couldn't have been prouder of her squad.

This from a woman who holds a gold medal from the 1984 Olympics and is the only person to win an NCAA championship as a player, assistant coach and head coach. (She won two titles as a point guard at Louisiana Tech before helping lead the Lady Techsters to the 1988 championship as an assistant.)

She had the highest of praise for her star center, the paper reported.

"Brittney Griner may go down in history as the most dominant post player, especially on the defensive end," Mulkey said. "That child comes to work every day."

The 6-foot-8 Griner has been breaking the mold of the female player for years - like the time she posted a quadruple-double (36 points, 15 rebounds, 15 blocks and 10 assists) during a high school game, or when she put down 52 dunks during her senior season in high school, or when she dunked four times as a freshman at Baylor, or when she tallied 23 points a game during her sophomore and junior seasons, or when she became the second woman to dunk during an NCAA Tournament in last month's game against the Florida Gators.

There has even been talk that she could hang with the big boys in the NBA - though I'll stop right there so as not to rile up the clowns on Twitter who can't get over the fact that she's tall.

Seeing as the women's championship didn't get nearly the attention of Monday night's men's championship, there's probably a lot you don't know about Griner. Here are some interesting tidbits:

- Despite the praise heaped upon her, Griner remains largely humble, brushing off notions that she is revolutionizing the game. At the same time, she is a true showwoman and puts on dunking clinics during pregame warmups, to the crowd's delight. She's even done cartwheels across the field at Baylor football games.

- One of four siblings, she was born in Houston, Texas, on October 18, 1990, and played at Nimitz High School in Houston, so she's been playing in East Texas for a minute.

- She set a block record at Nimitz, once registering 25 in a game against Aleif Hastings High.

- Her high school jersey is one of 25 in the Women's Basketball Hall of Fame's Ring of Honor.

- Baylor has a 101-13 record since she joined the team and has advanced to at least the NCAA Tournament's Elite Eight in all three of Griner's seasons.

- She is a general studies major with an emphasis in outdoor recreation.

- Griner is ranked first and third in blocks during an NCAA season. This year, she had 175, while on the men's side, the Kentucky Wildcats' shot blocker extraordinaire, Anthony Davis, had 186.

- She was the first female athlete to be evaluated in-studio for ESPN's "Sports Science."

- On March 3, 2010, she was ejected from a game against Texas Tech after punching Jordan Barncastle in the face following a scuffle under the rim. The punch broke Barncastle's nose.

- She is a finalist for the 2012 U.S. Olympic team that will play in London this summer. As the only college player on the team for its European Tour last year, she averaged almost 13 points and eight rebounds. She was the team's top shot blocker as well. Surprise, surprise.

- She is often seen riding a longboard around campus. She once described herself to the Chronicle as a "humongous kid" and said, "I do lots of stuff besides basketball. I'm an outdoors person. I go kayaking. I like to go mountain biking down hills, longboarding. I'm adventurous … maybe reckless. I'm a thrill seeker."

- She also enjoys working on cars and watching football in her spare time.