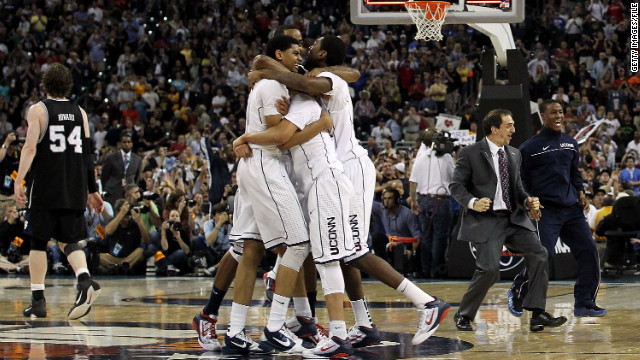 [Updated at 5:20 p.m. ET] The University of Connecticut men's basketball team cannot compete for next year's national championship after the NCAA denied the school's appeal of a postseason ban based on its athletes' academic performance, the university said Thursday.

The Huskies earlier had been ordered to sit out the 2013 NCAA tournament, because of its past players' sub-par academic performance rate. Led by longtime coach Jim Calhoun, the program had won that tourney last spring and, thus, captured the national title.

The University of Connecticut appealed that decision, but to no avail, NCAA spokesman Erik Christianson confirmed.

"It is disturbing that our current players must pay a penalty for the academic performance of students no longer enrolled," University of Connecticut President Susan Herbst said in a statement. "No educator or parent purposefully punishes young people for the failings of others."

"No one should EVER be held against their will... or ever have to ask permission to access everything they've workeâ€twitter.com/i/web/status/1â€¦SL
cnni

4:39 am ET June 24, 2021 RETWEET
The former President of the Philippines Benigno Aquino III died Thursday at the age of 61 after being hospitalizedâ€twitter.com/i/web/status/1â€¦fA
cnni

3:31 am ET June 24, 2021 RETWEET
National Geographic, one of the world's pre-eminent and most visible mapmaking groups, has officially decreed the eâ€twitter.com/i/web/status/1â€¦Ok
cnni

3:01 am ET June 24, 2021 RETWEET
An ancient mummy, believed to belong to a priest, got a CT scan at a hospital in Milan, Italy. The procedure is parâ€twitter.com/i/web/status/1â€¦Ep
cnni