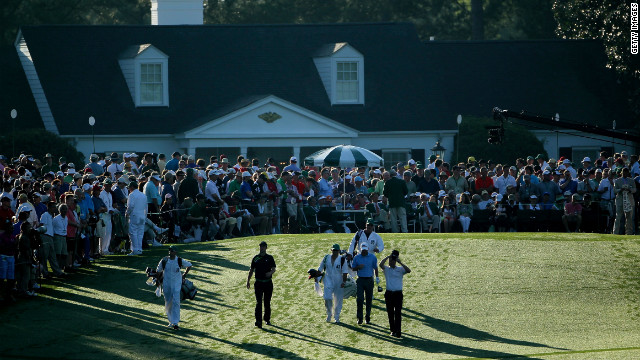 Augusta, Georgia (CNN) - Ask women at Thursday's first round of the Masters Tournament whether they'd paid attention to the controversy over Augusta National's male-only members policy, and you get a quick reply.

"We were just talking about that," one woman said.

Ask them if they think change is needed, and you get divergent opinions.

"I surely believe women should play golf anytime and anywhere they want to," said Linda Hines of Birmingham, Alabama. "Equality for all, pay and golf."

IBM sponsors the tournament, and the club has always extended membership to the company's officers. But IBM's new CEO is a woman, Virginia Rometty. Critics have called on Augusta National to offer her its traditional green jacket.

But Hines, who said she loves golf, believes any change at Augusta must come from within. She said she didn't like the scene in 2003 when Martha Burk, then leader of the National Council of Women's Organizations, led protests outside of Augusta.

"The board of directors has to have an open mind," she said. "Times are a changing."

Speaking to the media Wednesday, club chairman Billy Payne didn't indicate that times would be changing at Augusta.

"All issues of membership are now and have historically been subject to the private deliberation of members," Payne said. "That statement remains accurate; it remains my statement."

Elizabeth Walters of Wilmington, North Carolina, who was at Thursday's first round with her two children and mother, was fine with that approach.

Walters said she sees no need for Augusta to open membership to women and would not let the controversy detract from the tournament.

"It's a wonderful tradition, and I'm happy to be here," she said.

She also said her husband is from Augusta, making her familiar with the area.

"I've never had anyone that I've met here who has a problem with the way things are," she said.

Her mother, Nancy Mengelt, is from Madison, Wisconsin, a liberal area where "we usually have a problem with something," she said.

But she said she had no problem with male-only Augusta National.

"I like all the traditions. I support that," she said.

Support for Augusta came from Down Under, too.

"The club should stick to tradition and not allow women to become members," said Ro Brownie, attending the Masters after flying in from Sydney, Australia.

Brownie said if IBM's Romelty isn't a golfer and doesn't want to play here, she should put a stop to the hubbub.

"She should wave it away," Brownie said.

Ashley Mohrman said she's a member of "a very old conservative club" in Massachusetts, which changed its rules to allow women to become members with their husbands. And it has recently admitted a same-sex couple, she said. But she's not troubled by the Augusta stance.

"I don't think it is a problem for most people," she said.

1:28 pm ET April 17, 2021 RETWEET
Some startups are bucking the SUV trend and unveiling tiny electric cars that will carry just one or two people andâ€twitter.com/i/web/status/1â€¦WC
cnni