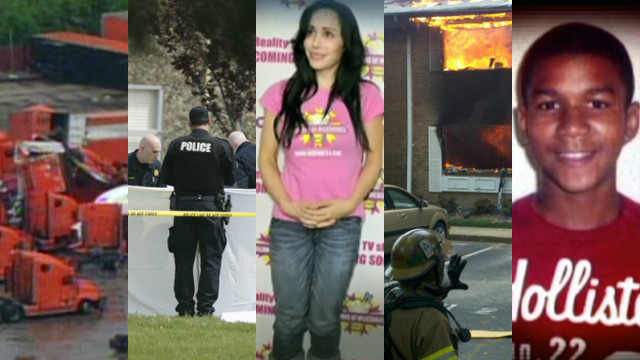 This week's top video gained the attention of more than a million CNN.com viewers and featured chilling footage of the Texas tornadoes tossing tractor-trailers into the air. The second most watched video on CNN.com this week was the tragic firsthand account of the Oakland university shooting, followed by video examining Nadya Suleman's welfare application, the crash of an F-18 jet into a Virginia apartment complex and finally the timeline of the Trayvon Martin shooting.

Truck trailers are thrown around violently as a tornado rips through North Texas. Watch the chilling video of a powerful tornado throwing tractor-trailers hundreds of feet into the air as if they were toy trucks.

Nadya Suleman admits being on welfare 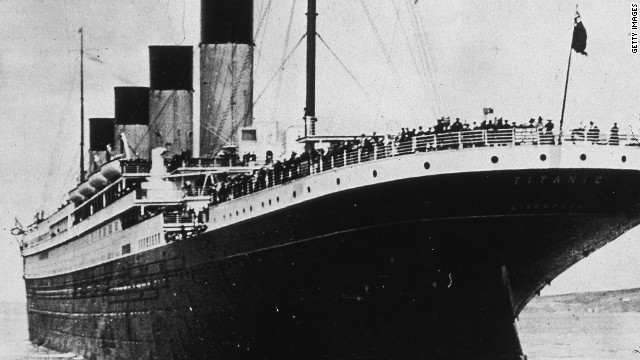 Overheard on CNN.com: Yes, the ship sinks, but we can't get enough of Titanic story

Editor's note: This post is part of the┬ĀOverheard on CNN.com┬Āseries, a regular feature┬Āthat examines interesting comments and thought-provoking conversations posted by the community.┬ĀThe entry includes 1,912 words.

Nearly 100 years ago, the Titanic set sail on its ill-fated maiden voyage. Readers discussed why this story resonates through history.

Why the Titanic fascinates more than other disasters

Otasawian: "I am a resident of Halifax, Nova Scotia. The place where 150 of the victims are buried and the location of a museum dedicated to the tragedy. The Titanic disaster is an important part of Halifax and Nova Scotia folklore. I believe that the fascination of the Titanic disaster has to do with the fact that it has become a metaphor for instances when people mistakenly believe they have become invincible. Too often, individuals, corporations, political parties, sports teams and nations, etc., who have become powerful in their own right begin to believe that they are so strong they cannot suffer defeat. They begin to believe that they are 'too big to fail' and once this happens reality deals them a crippling blow. The sinking of the Titanic and the folklore/legend surrounding the Titanic disaster provide a reminder that no one or anything is invincible. All powerful individuals and groups are subject to fail due to the human characteristics of hubris and complacency that tend to creep into our minds when we believe that things are going well."

Quincy Brown:┬Ā"Speaking of Halifax, I have been to that cemetery, that is shaped like a ship with the headstones. I found it interesting that the cemetery ship is pointing exactly in the same direction as the sunken Titanic. I find it interesting just how many parallels before the sailing, the sinking, and the aftermath has in life lessons. It's even more ironic that the word Titanic┬Ācan even be used as a verb now. I have heard sailors talk about the Titanic. Naming your boat after Neptune's mortal enemy, the Titans, proudly exclaiming that God could not sink this boat, and have enough arrogance to try to stand before life and say nothing can stop you. There was no way this ship could have made it, yet so many who do the same sort of things even today, like running from the police, hurting people, doing bad things, think they are somehow above the law, above the people, and yet they all suffer a bad fate eventually. Life lessons time and time again in Titanic proportions."

[Updated at 6:05 p.m. ET] A Navy fighter jet experienced a "catastrophic mechanical malfunction" during takeoff Friday over the military community of Virginia Beach, Virginia, and rained a stench of jet fuel shortly before crashing into apartment buildings, according to residents and Navy officials.

The jet carried a student pilot in the front seat and an experienced instructor behind him, and the dumping of jet fuel was "one of the indications that there was a mechanical malfunction," Navy Capt. Mark Weisgerber told reporters.

The malfunction is being investigated, he said.

None of the injuries was considered life-threatening, Thames said.

The crash and explosion ruptured the easy mood of spring break and the unfolding Easter and Passover holiday weekend, and the two-seater F/A-18 jet landed eerily upright in flames in a courtyard surrounded by five apartment buildings suddenly set afire, according to residents and authorities.

The two crew members ejected safely, the Navy said. Resident Pat Kavanaugh told CNN affiliate WTKR that he and others found one of them still strapped to his seat with a lacerated face. Kavanaugh said he was on his couch when he heard a loud boom and was startled to see a parachute hanging from the building.

[Updated Friday at 4:09 p.m. ET] Washington Councilman Marion Barry said Friday he could've rephrased his controversial remark about "dirty" Asian businesses in his district, but he refused to back down.

He said his adrenaline was flowing after Tuesday's primary victory, when he made the comment, and that he merely was trying to convey that the business community in his Ward 8 needs a new attitude. Asians run a large percentage of the ward's stores and small shops, he said.

ŌĆ£I said something that I probably could have phrased differently. What you mean is the same. YouŌĆÖre not going to have people who are exploiting us in this community. TheyŌĆÖre going to be part of the community. We welcome all businesspeople here ŌĆ” but give us some jobs.ŌĆØ

Several lawmakers, including the D.C. mayor and some of Barry's fellow council members, condemned his remarks - criticism Barry downplayed earlier this week. CNN's Athena Jones, who interviewed Barry on Friday, also spoke to Korean shop owner Helen Lee, who said she was angered by the councilman's castigation.

"We work really hard to keep our facility clean and to serve, like, this community. We've been here for over 20 years now," said Lee's daughter, Miriam. "So it's really insulting for him to come out of the blue and say that we're dirty and that, you know, we should be replaced, basically because we've been here for so long."

END_OF_DOCUMENT_TOKEN_TO_BE_REPLACED

In many ways, the "kill the head" speech by former New Orleans Saints defensive coordinator Gregg Williams sounds like typical pregame, fire-up-the-troops rhetoric, but former and current players say there are several instances where the now-suspended coach crossed the line.

The speech has added new fire to an already scalding scandal in which the NFL alleges that the Saints administered a bounty program aimed at taking out opposing players.

The day before the Saints' January 14 playoff clash with the San Francisco 49ers, Williams started his speech by instructing his team to never apologize for how they play. No big deal.

Williams goes on to say, "Kill the head, the body will die," a twist on the frequent tutelage of boxer "Smokin'" Joe Frazier. It sounds nefarious given the recent attention given to concussions in football, but it could probably be written off as normal locker room bravado.

Former Detroit Lions cornerback Lamar Campbell, who retired in 2004, told the Detroit Free Press that Williams' speech began like many that Campbell heard during his playing days. Listening to it made him reminisce at first.

Perhaps most disturbingly, Gregg Williams demands a big hit on kick returner Kyle Williams because of a recent concussion, something the New York Giants' Jacquian Williams and Devin Thomas caught heat for the following week when they said the same thing.

"WeŌĆÖve got to do everything in the world to make sure we kill Frank Gore's head," Gregg Williams said on the tape. "We want him running sideways. We want his head sideways."

This could simply mean Williams wants his defense in the backfield so quickly that Gore has trouble getting upfield, that he wants Gore running east and west rather than north and south. Again, probably pretty typical of the instructions that defensive coordinators give to their men.

Even Williams' invocation to "knock the f*** out of" backup running back Kendall Hunter isn't as bad as it initially sounds because he follows it with world-class hyperbole.

END_OF_DOCUMENT_TOKEN_TO_BE_REPLACED

Augusta, Georgia (CNN) - While most of golfŌĆÖs greatest players plied their trade on the grounds of Augusta National this week, one worked the parking lot in front of the nearby Hooters restaurant.

John Daly, the winner of the 1991 PGA Championship and 1995 British Open, is spending Masters week selling shirts, hats and golf balls with his lion logo from tables set up outside his luxury motor home.

ItŌĆÖs a strategy to connect with fans on two levels.

ŌĆ£What sells I put on the website, what doesnŌĆÖt, I donŌĆÖt,ŌĆØ businessman Daly says of the display of wares. 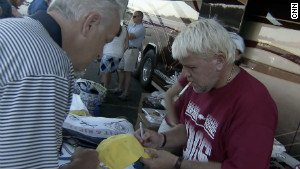 But buy here and you get to connect with Daly himself, and for golf fans itŌĆÖs hard to resist the opportunity to get up close with the man who delighted them on the course.

END_OF_DOCUMENT_TOKEN_TO_BE_REPLACED

Malawian President Bingu wa Mutharika, once hailed as a positive steward for the southern African country, has died after a heart attack, government officials said Friday.

His body was flown to South Africa, the officials said.

The former World Bank economist first became president in 2004 after campaigning as an "economic engineer," and was re-elected five years later.

Employers added 120,000 jobs in the month, the Labor Department reported Friday, marking a significant slowdown in hiring from February, when the economy added 240,000 jobs.

Meanwhile, the unemployment rate fell to 8.2% as workers dropped out of the labor force.

Some say the race to the Republican presidential nomination is over, while others argue that it's not over yet.┬Ā Watch CNN.com Live for all the latest news and views from the campaign trail.

10:15 am ET - Obama addresses women's forum - President Obama will deliver remarks at the White House Forum on Women and the Economy in Washington.

RT @HomefrontHugs: @sarasidnerCNN we need help Sara - pls share - thanks so much - or help if you wish xo
sarasidnerCNN

3:19 pm ET August 4, 2021 RETWEET
After pandemic-fueled delays last year, the Tokyo Olympics have gotten a lot of attention around this summer. UnforŌĆtwitter.com/i/web/status/1ŌĆ”Ww
cnni

3:00 pm ET August 4, 2021 RETWEET
It's been a year since one of the world's largest ever non-nuclear explosions ripped through Lebanon's capital, kilŌĆtwitter.com/i/web/status/1ŌĆ”1m
cnni