About 50 people have been arrested in Minneapolis as the state plans to send in 1,700 National Guard soldiers‚Ätwitter.com/i/web/status/1‚Ä¶VT

A 19-year-old man was killed after shots were fired into a crowd of protesters in Detroit from an unknown suspect i‚Ätwitter.com/i/web/status/1‚Ä¶KC

Minnesota Gov. Tim Walz delivers a late night address to his state as protests continue in Minneapolis and around t‚Ätwitter.com/i/web/status/1‚Ä¶1X 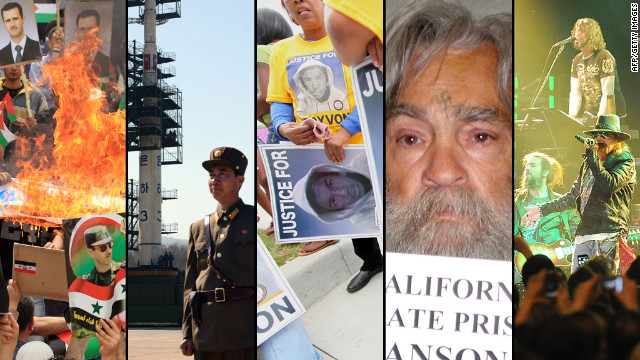 Syria suggests it might not pull forces by deadline

A Syrian foreign ministry spokesman suggested Sunday that the government might not withdraw its armed forces from cities by Tuesday as agreed under a peace plan laid out by U.N.-Arab League special envoy Kofi Annan.

Jihad Maqdisi said Syria will not commit to the withdrawal only to have "armed terrorist groups" commit attacks once the forces are pulled. He said Annan "did not give written assurances that the armed groups would turn in their weapons."

Annan has said he expects rebel fighters to also cease fire after the Tuesday deadline, but the deadline itself was for regime forces to withdraw from cities. Meanwhile, opposition activists say government forces have stepped up their attacks ahead of the deadline, and that 40 people were killed across the country in fresh violence Sunday.

Throughout a more than year-long uprising against the regime, the Syrian government has consistently blamed violence on "armed terrorist groups." But U.N. and other world leaders have said the government is engaged in a violent crackdown.

Reports from Syrian opposition activists suggest government forces are slaughtering civilians in an attempt to wipe out dissidents seeking President Bashar al-Assad's ouster. Rebel fighters have taken up arms, but their strength has often paled in comparison to the better-equipped regime troops.

The United Nations estimates that the fighting in Syria has killed at least 9,000 people.

This might be the week that North Korea launches a satellite using a long-range rocket, which some governments, including those of the United States and South Korea, see as a cover for a ballistic missile test.

International leaders have urged North Korea to cancel the launch, expected to happen between April 12 and April 16, but Pyongyang has refused to back down, insisting that the operation is for peaceful purposes.

South Korea has said it considers the satellite launch an attempt to develop a nuclear-armed missile, and that the launch would violate a U.N. Security Council resolution that bans the testing of the technology being used in the rocket-powered satellite.

Plans for the launch prompted Washington to suspend a recent deal to supply food aid to North Korea. In that deal, North Korea agreed it would not carry out nuclear or missile tests in return for the aid.

Part of the significance of this launch is its timing to coincide with the 100th anniversary of the birth of Kim Il Sung, who ruled the Communist state for more than four decades.

A grand jury that is expected to convene this week in Florida might take up the case of Trayvon Martin, a Florida teenager who was fatally shot by a neighborhood watch volunteer in February. If it does take the case, it will consider whether to indict the volunteer, George Zimmerman, who told police he shot the unarmed 17-year-old in self-defense.

The shooting in Sanford, Florida, happened after Zimmerman called 911 to report a suspicious person in his neighborhood. Zimmerman says he killed Martin after the teen punched him and slammed his head on the sidewalk, according to an Orlando Sentinel report that was later confirmed by Sanford police. Zimmerman has not been arrested or charged in connection with the case, though the state attorney's office is investigating the shooting.

Martin's family and supporters say Zimmerman, who is Hispanic, racially profiled the teen, who was black, and ignored a police dispatcher's directive not to follow him. Zimmerman's attorneys interpret the call differently, and say the operator did not order Zimmerman not to follow.

A California prison panel will meet Wednesday to consider whether notorious killer Charles Manson should be denied parole for a 12th time.

Manson initially was sentenced to death for the 1969 slayings of actress Sharon Tate and six others by a group of his followers as part of what prosecutors said was an attempt to incite a race war. His death sentence was changed to life in prison after California's death penalty was overturned for a period during the 1970s.

Manson has not been a model inmate. In the past five years, Manson was punished for threatening a peace officer and for possession of a weapon, the latter happening in October when Manson was found with a sharpened pen, California Department of Corrections spokeswoman Terry Thornton said.

Manson was found to be in possession of a contraband cell phone ‚ÄĒ twice ‚ÄĒ the latest in January 2011. That incident is still under investigation.

A Peruvian official has suggested that rescue workers might be close to freeing nine miners who have been trapped below ground in southern Peru since Thursday.

It was not immediately clear what caused the collapse that trapped the miners at the Cabeza de Negro mine.

Miners have been getting oxygen, food and water through a tube, which has also allowed them to stay in contact with people above ground, the state-run Andina news agency reported.

Cleveland will be rocking during Saturday's annual Rock and Roll Hall of Fame induction ceremony.

The event will be a reunion of sorts for the original members of Guns N' Roses, all of whom are expected to attend for the group's induction. It's not clear whether they'll be performing.

The ceremony also will mark the induction of six backing groups that didn't get into the Hall of Fame at the same time as their frontman. Those backing groups are the Blue Caps (Gene Vincent), the Comets (Bill Haley), the Crickets (Buddy Holly), the Famous Flames (James Brown), the Midnighters (Hank Ballard) and the Miracles (Smokey Robinson).

RT @CNN: These are just a few of the reasons demonstrators say they showed up to protest yesterday: "My son asked me, 'Am I going to live‚Ä¶
cnni

8:14 am ET May 30, 2020 RETWEET
London Mayor Sadiq Khan has urged citizens to ‚Äúact with caution‚ÄĚ as the UK government prepares to ease lockdown mtwitter.com/i/web/status/1‚Ä¶NwVpeY
cnni

7:32 am ET May 30, 2020 RETWEET
The next attempted SpaceX-NASA launch is scheduled for this afternoon but thunderstorms and lightning could once ag‚Ätwitter.com/i/web/status/1‚Ä¶Ms
CNNweather