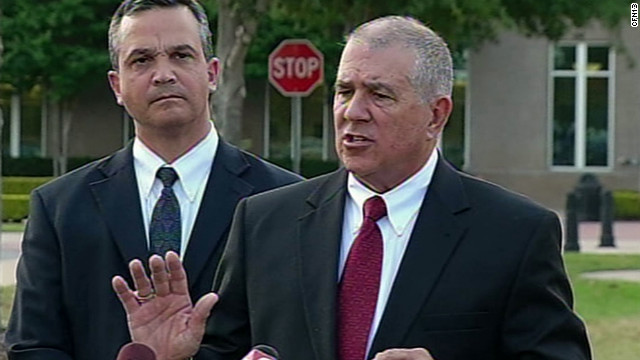 The following are details from a press conference by the former attorneys for George Zimmerman, a neighborhood watch volunteer who authorities say fatally shot an unarmed teenager in Florida. The attorneys said Tuesday that they're no longer representing him, because they have lost contact with him.

Zimmerman's attorneys, Hal Uhrig and Craig Sonner, said that Zimmerman has taken a number of steps without them since Sunday, but that they would be willing to represent him again if he asked them.

[Updated at 5:29 p.m. ET] The news conference has finished. The attorneys used much of it to continue to argue that Zimmerman acted in self-defense in the shooting, which police said happened after Zimmerman had called 911 to complain about a suspicious person in his neighborhood in Sanford, Florida.

Uhrig said Zimmerman's account of his February 26 confrontation with Trayvon Martin was that Martin became the aggressor when Zimmerman asked Martin what he was doing, and that Martin hit Zimmerman in the nose.

The crime that was committed that night, Uhrig said, was battery against George Zimmerman.

[Updated at 5:20 p.m. ET] Uhrig and Sonner have said several times that they believe the evidence in the Trayvon Martin shooting, including forensics, will show that Zimmerman was acting in self-defense.

"We still, frankly, are optimistic there will never be a need for him to turn himself in," Uhrig said.

"There's no evidence since the day the Earth cooled whatsoever that George Zimmerman ever has been racially motivated," Uhrig added.

Some supporters of Trayvon Martin, who was black, say they wonder whether Zimmerman, who is Hispanic, was motivated by race. Uhrig said that Zimmerman is not racist.

[Updated at 5:13 p.m. ET] Uhrig and Sonner said they have yet to meet Zimmerman in person, and through Sunday had contacted him only by phone, texts and e-mails.

Sonner said he is "reasonably sure" he knows where Zimmerman is, adding that his former client is somewhere in the United States.

Uhrig said that people who were hunting for Zimmerman "can stop looking in Florida."

[Updated at 5:08 p.m. ET] Uhrig said that pressure might have "pushed him a little over the edge and (he) thought, 'I'm going to take care of it myself."

"Our thought process is, we're professionals. We do this for a living. We try to do a good job of it, but we are not going to put ourselves out to the public ... unless he makes it clear to us that he wants us as his lawyers," Uhrig said.

[Updated at 5:02 p.m. ET] Uhrig said Zimmerman has taken his own steps since they lost contact with him on Sunday, including:

- Setting up his own website under a different Web address than what the attorneys had arranged with him.

- Speaking to Fox News' Sean Hannity by phone, apparently off the record. "(Hannity) is not willing to tell us what our client told him."

- Calling the special prosecutor's office directly, as opposed to through his attorneys, and offering to come in and answer investigators' questions. The prosecutor's office told Zimmerman that they weren't going to talk to him without counsel, Uhrig said.

[Updated at 4:49 p.m. ET] The attorneys for George Zimmerman, a neighborhood watch volunteer who authorities say fatally shot an unarmed teenager in Florida, say they're no longer representing him, because they have lost contact with him.

Attorneys Craig Sonner and Hal Uhrig say they last had contact with Zimmerman on Sunday. Since then, Zimmerman hasn't returned their phone calls or text messages, they told reporters Tuesday afternoon.

"He has gone on his own. I don't know what he's doing or who he's talking to," Sonner said. "... “I cannot represent a client who doesn’t stay in contact with me.”

Sonner said he and Uhrig would resume representing Zimmerman if he asks them.

[Initial post, 4:22 p.m. ET] The attorneys for neighborhood watch volunteer George Zimmerman, who authorities say fatally shot an unarmed teenager in Florida, are expected to speak to the news media about the case Tuesday afternoon.

Watch this page for developments.

Police say Zimmerman fatally shot Trayvon Martin, a 17-year-old African-American, on February 26 in Sanford, Florida, after Martin began walking home from a convenience store. Zimmerman, who is Hispanic, had called 911 to complain about a suspicious person in the neighborhood.

But thousands have converged on Sanford to join in protests calling for Zimmerman's arrest and criticizing the police department's handling of the case. Martin's death has triggered a nationwide debate about race in America and Florida's "stand your ground" law, which allows people to use deadly force anywhere they feel a reasonable threat of death or serious injury.

A special prosecutor is investigating the case, and has not indicated when she will decide whether to file charges.