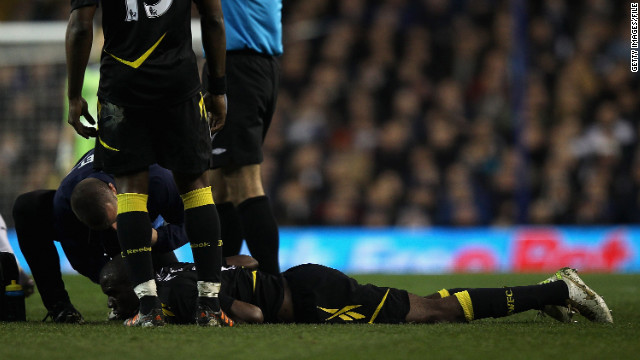 Bolton's Fabrice Muamba to get defibrillator, return to training, according to reports

The Bolton Wanderers' Fabrice Muamba is not only on the mend, according to media reports, but - incredibly - he may soon be able to return to training.

The Zaire-born Englishman, who turned 24 last week, collapsed last month during an English FA Cup match against Tottenham. Doctors said he suffered a cardiac arrest and was, in effect, dead for 78 minutes as medics tried to restart his heart.

He gave the sporting world a fright as he lay motionless on the field for several minutes before being put into an ambulance where efforts to revive him continued. The Tottenham match was postponed until later in the month.

Less than a week after Muamba's collapse, doctors said he was improving - joking about and speaking in English and French - despite remaining in serious condition. Today comes news from the Daily Mirror that Muamba will have a minor operation to install a miniature defibrillator in his armpit.

The procedure will take place at the London Chest Hospital, where Muamba has been treated since his March 17 collapse. The purpose of the procedure, according to the tabloid, is to help him in the event he suffers a similar event in the future, as Muamba intends to return to training with his squad.

Media reports have suggested that Muamba's condition has steadily improved, and last week, Bolton manager Owen Coyle told The Telegraph in London that Muamba had been walking around his hospital room.

"He’s come out the bed and sat in the chair. That was a week ago. And bit by bit the improvements are coming. God willing he gets back to a high standard," he said. “He’s getting better day by day."

Muamba played in 20 league games for Bolton this season.

Coyle further said Muamba's specialists "were astonished by his progress."

Someone tweeting from Muamba's account March 30 posted a photo of the midfielder sitting up in bed and grinning.

"Fab wanted me to post this pic for you all and to also say thank you for such overwhelming support," the tweet said.

On Monday, the Bolton News reported that despite initial concerns that Muamba would never play again, tests show no reason to keep him off the pitch and heart specialists said they don't envision any long-term issues. He should be told this week he can resume his career, according to the paper.

A Bolton supporter described the recovery as a "miracle."

Muamba is expected to leave the London Chest Hospital in coming days for a hospital in Cheadle. There, he will undergo tests before returning to his Wilmslow home where he will join his fiancee and 3-year-old son, the Bolton News has reported.

A product of Arsenal's youth academy, Muamba is amid his fourth season with the Wanderers. Though not a prolific scorer, he has been a regular on the Bolton squad, playing in 20 of Bolton's first 28 Premier League matches before his collapse. He made 41 appearances in all competitions last season.