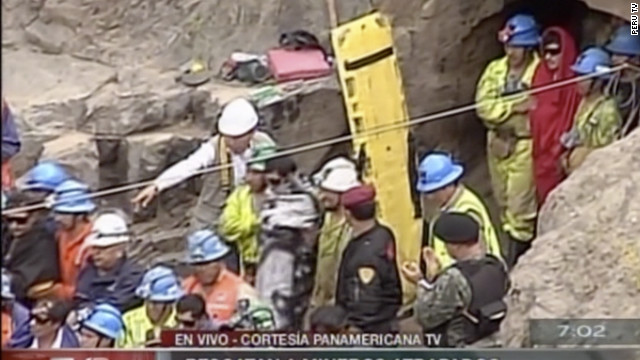 Nine Peruvian miners rescued after being trapped for days

Nine Peruvian miners were rescued Wednesday from a mine where they had been trapped for days.

State television showed the miners leaving the mine, each supported by two rescuers. They wore sunglasses.

Peruvian President Ollanta Humala greeted the miners at the mouth of the mine. The group unfurled the red and white Peruvian flag and waved at the television cameras.

"We are happy that this high-risk operation was successful," said Claudio Saenz, a fire department official with knowledge of the rescue efforts.

The nine miners have been stuck since Thursday in the wildcat Cabeza de Negro mine in southern Peru.

A cave-in over the weekend slowed progress. For days, a hose placed in the collapsed cavern was the only connection the miners had to the surface.

The miners had been getting oxygen, food and water through a tube, which has also allowed them to stay in contact with people above ground, Peru's state-run Andina news agency reported.

11:15 am ET December 2, 2021 RETWEET
A group of 11 artists and activists has claimed the prestigious Turner Prize after transforming a gallery space intâ€twitter.com/i/web/status/1â€¦OF
cnni

10:45 am ET December 2, 2021 RETWEET
Buying a cheap property in Italy is an attractive prospect for many travelers, particularly with the ever-growing nâ€twitter.com/i/web/status/1â€¦wh
cnni

10:29 am ET December 2, 2021 RETWEET
Sometime after Hernan Cortes conquered the Aztec capital of Tenochtitlan in modern-day Mexico City in 1521, an indiâ€twitter.com/i/web/status/1â€¦oZ
cnni