George Zimmerman, a neighborhood watch volunteer who says he was acting in self-defense when he fatally shot teenager Trayvon Martin in Sanford, Florida, has been charged with murder in the second degree, special prosecutor Angela Corey told reporters Wednesday.

Corey said that Zimmerman has surrendered to authorities in Florida and has been arrested. The charge carries a maximum possible sentence of life in prison.

Police say Zimmerman fatally shot Martin, a 17-year-old African-American, on February 26 in Sanford, Florida, after Martin began walking home from a convenience store. Zimmerman, who is Hispanic and was a neighborhood watch volunteer, had called 911 to complain about a suspicious person in the neighborhood. He was released without charges after claiming self-defense, but the case was referred to Corey for a review as thousands converged on Sanford to join in protests calling for Zimmerman's arrest.

The following are running updates on the story:

[Updated at 7:30 p.m. ET] Zimmerman's new attorney, Mark O'Mara, said that he expects to file a motion seeking bond for Zimmerman on Thursday. Currently, Zimmerman is being held without opportunity for bond.

O'Mara told CNN by phone that he thinks Zimmerman is "troubled by the fact that the state decided to charge him," but that he "understands what is in front of him," and he's "doing OK."

At a news conference outside his office seconds later, O'Mara told reporters that Zimmerman voluntarily surrendered to Florida authorities, and that authorities were in the process of moving him to custody in Seminole County, Florida.

"He's concerned about getting a fair trial and a fair presentation," O'Mara said. "There's obviously been a lot of information flowing. I think a lot of it has been premature and inappropriate."

"The worst thing that can happen in this case is that it doesn't get tried properly," O'Mara said. "Give us our chance to do it the way it's supposed to be done."

On Tuesday, Zimmerman's former attorneys Hal Uhrig and Craig Sonner told reporters they had lost contact with Zimmerman and no longer represent him.

[Updated at 7:04 p.m. ET] Sanford's mayor, Jeff Triplett, called "for continued calm in Sanford, its surrounding communities and around the nation."

"The case is in the hands of the justice system. Please allow it to work through the process and come to a natural conclusion," Triplett said in a news conference in Sanford, following Corey's announcement.

[Updated at 6:58 p.m. ET] Martin's father, Tracy Martin, thanked "everyone for being compassionate about this."

"As (Martin's attorney, Benjamin Crump) said, this is just the beginning. We have a long way to go, and we have faith," Tracy Martin said.

Trayvon Martin's parents and their attorneys were at a news conference with the Rev. Al Sharpton in Washington, D.C., where the parents have been visiting an annual conference held by Sharpton's National Action Network.

Tracy Martin spoke of the marches in which people called for justice in the case.

[Updated at 6:56 p.m. ET] An emotional Sybrina Fulton - who is Martin's mother - reacted to Wednesday's news:

"First of all, I want to say: Thank God. We simply wanted an arrest," she told reporters in Washington, D.C. "We wanted nothing more and nothing less, and we got it. And I say thank you. Thank you, Lord. Thank you, Jesus."

[Updated at 6:49 p.m. ET] The attorney for Martin's parents, Benjamin Crump, standing with the parents and the Rev. Al Sharpton, told reporters in Washington, D.C., said that if one were to look at the facts and evidence fairly, Zimmerman "had to be arrested, and this matter had to go before a judge and a jury."

"We can take a short breath, because we are just now getting to first base," Crump said. "This is only first base. Trayvon's legacy cannot be tarnished based on people doing sick things and acting (on) ignorance or using violence."

[Updated at 6:42 p.m. ET] The Rev. Al Sharpton, standing with Trayvon Martin's parents at a news conference in Washington, D.C., said "there should be no high-fiving" over Zimmerman's charge.

"There’s no winners here. … This is not about gloating. This is about pursuing justice. We have not won anything. All we have established is we have the right to redress," Sharpton said.

"If we did not get this far, we would condemn them," Sharpton said. "We must say that despite the fact that we are of ... different political persuasions ... we came together and said only the facts should matter."

"We are trying to make sure that something happens so that this will not happen again," Sharpton said.

[Updated at 6:34 p.m. ET] Benjamin Jealous, president of the National Association for the Advancement of Colored People, issued a statement following the announcement of charges against Zimmerman:

“Forty–five days after Trayvon Martin’s life came to a violent end, the wheels of justice have finally begun to turn. This is an important first step toward bringing justice for Trayvon and his family," Jealous' statement began.

"As we have seen, the system does not always work perfectly. But we have shown that when we stand together as a nation we can compel it to work. For the NAACP, this case has always been about the rule of law. We are encouraged by today’s charges, but we know that this is just the beginning. We anticipate and expect a thorough federal investigation of the Sanford Police Department and their role in exacerbating this tragedy," Jealous said.

Jealous said "Trayvon’s case moved the nation because it underscored the twin tragedies that affect so many of our young people: Trayvon was profiled because of his race—looked upon as a threat rather than the loving son he was."

"And then, once he became a victim, he was neglected by the very police department tasked with protecting our communities and families," Jealous said. "As a nation, we’ve got to address the issues of racial profiling and the valuation of black mens’ lives by law enforcement. In the months ahead the months ahead, the NAACP and our allies in the civil rights community will continue to take these issues on as well as the urgent need to repeal stand-your-ground laws.

"Tonight our thoughts and prayers are with Trayvon’s family. We are grateful for the courage and tenacity of Sybrina Fulton and Tracy Martin that continue to help shape a national movement for justice for their son and for all of America’s children.”

[Updated at 6:20 p.m. ET] In Florida, a charge of second-degree murder carries a maximum sentence of life in prison, according to CNN and HLN legal analysts. Florida does not offer the chance for parole for those convicted of the charge. The sentence would, however, take into account several mitigating and aggregating factors.

[Updated at 6:17 p.m. ET] Zimmerman is being held without opportunity for bail, but Zimmerman's lawyers are entitled to request a bond, Corey said. Once they do so, a bond hearing will be held, she told reporters.

[Updated at 6:16 p.m. ET] While Corey said that Zimmerman surrendered and is in the custody of authorities in Florida, she declined to say exactly where, citing concerns for the safety of Zimmerman "and everyone else."

[Updated at 6:12 p.m. ET] Corey said she wouldn't discuss what led her to file the second-degree murder charge, other than her conclusion is based on her review of the evidence. 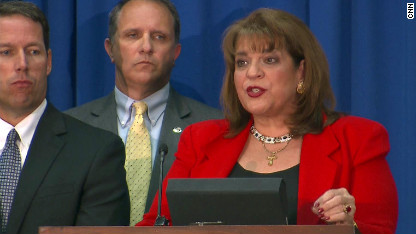 Florida state attorney Angela Corey said she spoke with Trayvon Martin's parents before telling the media about the charge against Zimmerman.

[Updated at 6:07 p.m. ET] George Zimmerman has been charged with second-degree murder in connection with the February 26 shooting of Trayvon Martin, Corey said.

What happens now that Zimmerman is charged in Trayvon Martin death?

[Updated at 5:51 p.m. ET] George Zimmerman has turned himself in to law enforcement and is in custody in Florida, according to CNN legal analyst Mark NeJame.

Zimmerman also has a new attorney, Mark O'Mara, according to NeJame.

NeJame reported that Zimmerman, before he surrendered, was "out of the state of Florida, as I understand it, for his safety."

On Tuesday, Zimmerman's former attorneys Hal Uhrig and Craig Sonner told reporters they had lost contact with Zimmerman and no longer represent him.

[Updated at 4:55 p.m. ET] Florida Gov. Rick Scott has released a statement ahead of the special prosecutor's news conference:

"We are fortunate in our state that most Floridians and local civic leaders are law-abiding, responsible citizens who all want justice to prevail. No matter what State Attorney (Angela) Corey determines following her investigation of the Trayvon Martin tragedy, I trust in the goodness of all Florida citizens to allow our justice system to reach an appropriate conclusion in this case."

[Updated at 3:34 p.m. ET] The parents of Trayvon Martin plan to hold a news conference after the special prosecutor makes her announcement.

Martin's parents, Tracy Martin and Sybrina Fulton, will be accompanied by their attorneys and the Rev. Al Sharpton in Washington, D.C., where the parents have been visiting a conference held by Sharpton's National Action Network.

[Updated at 3:07 p.m. ET] Many people in Sanford, Florida and around the world have been captivated by the Trayvon Martin case and have lent their support to Martin's family.

Upon hearing the news that special prosecutor Angela Corey was holding a press conference today to update the media, Martin's mother Sybrina Fulton tweeted that the case was in God's hands now.

[Updated at 3:02 p.m. ET] The office of special prosecutor Angela Corey has confirmed that a news conference updating the media on the Trayvon Martin case will begin at the State Attorney’s Office in Jacksonville, Florida at 6 p.m. ET.

[Updated at 2:51 p.m. ET]  Corey's office, which is investigating the Trayvon Martin shooting case, said that charges against George Zimmerman have not been filed. The office would not confirm whether the office planned to charge him, according to HLN's Josey Crews.

Earlier, CNN reported that Corey is expected to announce a decision Wednesday regarding whether she will file charges against Zimmerman, and a senior law enforcement source familiar with the Martin death investigation said that Zimmerman would be charged.

[Updated at 2:39 p.m. ET]  George Zimmerman “will be (criminally) charged if (he) hasn’t been charged already,” according to a senior law enforcement source familiar with the Trayvon Martin death investigation.

It's not clear what the charges would be.

[Initial post, 2:29 p.m. ET] A special prosecutor in the Trayvon Martin shooting case is expected to announce a decision within the next four hours regarding whether she will file charges against George Zimmerman, CNN reports.

The news comes a day after attorneys for Zimmerman told reporters they had lost contact with Zimmerman and no longer represent him.

Police say Zimmerman fatally shot Martin, a 17-year-old African-American, on February 26 in Sanford, Florida, after Martin began walking home from a convenience store. Zimmerman, who is Hispanic and was a neighborhood watch volunteer, had called 911 to complain about a suspicious person in the neighborhood.

But thousands converged on Sanford to join in protests calling for Zimmerman's arrest and criticizing the police department's handling of the case. Martin's death has triggered a nationwide debate about race in America and Florida's "stand your ground" law, which allows people to use deadly force anywhere they feel a reasonable threat of death or serious injury.