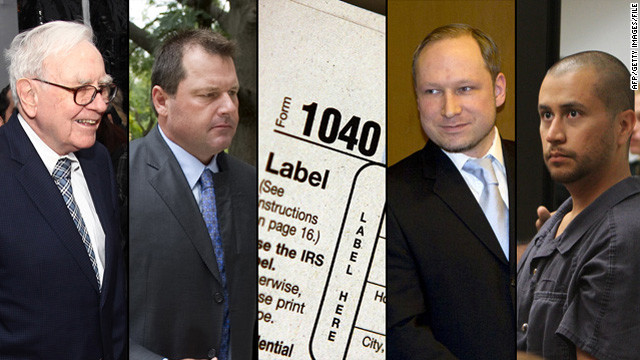 Here is a look at some of the stories CNN plans to cover this week:

Congress takes on the GSA

Multiple U.S. congressional committees are expected to hold hearings this week on allegedly wasteful spending at the General Services Administration, following reports of a lavish 2010 conference of GSA workers that prompted taxpayer and bipartisan congressional outrage.

An inspector general's report issued this month detailed the $820,000 conference, prompting the resignation of GSA chief Martha Johnson and the dismissal of¬†other high-ranking officials at the GSA, which acts as a real estate agency for the federal government.¬†Congressional investigators also are accusing the GSA of violating its employee gift limit with rewards of iPods, digital cameras and other electronics.

The Republican-led House Oversight and Government Reform Committee scheduled a hearing for this week and has¬†asked the GSA to deliver information about previous conferences, including their cost, a committee spokeswoman said. Also expected to hold hearings on the GSA this week are the Republican-led¬†House Transportation and Infrastructure Committee and the¬†Democratic-led Senate Environment and Public Works Committee.

The Democratic-controlled Senate this week could start considering legislation based on President Barack Obama's Buffett Rule proposal, which would impose a minimum 30% tax rate on people who earn more than $1 million.

The proposal probably would not pass the Republican-controlled House, even if it did pass the Senate. But for his re-election campaign, Obama is pushing the idea that the very rich should pay more in taxes, and the Buffett rule proposal will show he's trying to act on it.

CNNMoney's Jeanne Sahadi, who has reported extensively on the Buffett proposal, writes that among the facts getting lost in the rhetoric about the proposal is that most millionaires, although some pay less than 30% currently, already pay higher effective tax rates than just about everyone else.

The Tax Policy Center estimates that about one-third of the richest would pay higher taxes under the Buffett Rule in 2015 than they do today, Sahadi reports.

The Buffett Rule takes its name from investor Warren Buffett, who has called for high taxes on him and other super-rich Americans.

A neighborhood watch volunteer charged with second-degree murder in the shooting death of a Florida teenager might learn this week whether he'll be eligible to be released on bail while he awaits trial.

A bond hearing for George Zimmerman is tentatively scheduled for Friday.

Authorities say Zimmerman, a Hispanic, shot Martin, an African-American, on February 26 after Martin began walking home from a convenience store. Zimmerman had called 911 to complain about a suspicious person in the neighborhood.

Zimmerman has said he shot Martin in self-defense after the teen punched him and slammed his head on a sidewalk. He was released without charges after claiming self-defense, but the case was referred to a special prosecutor for a review as thousands converged on Sanford to join in protests calling for Zimmerman's arrest.

iReport: Debating the Zimmerman arrest and race in America

Opinion: Is Travon Martin's death the catalyst of a new movement?

Will World Bank get its first non-American president?

When the World Bank announces its new president on Monday, it could choose a non-American for the first time in its more-than-60-year history.

The bank always has been led by an American, part of a tacit agreement between the United States and its Western European allies, CNNMoney's James O'Toole reports. Europe, in turn, has maintained control of the top spot at the bank's sister organization, the International Monetary Fund.

The World Bank and the IMF were established in 1944 to help the Allied powers shape the post-World War II economic order. It now includes 187 shareholder states, offering loans and grants as well as technical expertise for projects around the world, including¬†health, education, infrastructure and private-sector development initiatives. The bank has offered nearly $250 billion worth of financial assistance over the past five years.

Some in Washington have argued that an American World Bank head is important to ensure continued congressional funding for the institution, O'Toole writes. But the bank has faced¬†complaints about the U.S. monopoly on the presidency and calls for the bank's leadership to better reflect the world's evolving economic order.

Nigerian candidate: Choose who is best qualified, regardless of nationality

Get your taxes done by Tuesday - or not

Procrastinators might have been pleased that they had a little more time than usual to file their U.S. tax returns, but that deadline is just about here.

The tax filing deadline typically is April 15, but this year taxes are due on Tuesday, April 17. The move happened because April 15 is a Sunday this year. Monday¬†is Emancipation Day, a holiday in Washington celebrating the freeing of slaves in the district. Under the tax code, filing deadlines can't fall on Saturdays, Sundays or holidays, CNNMoney's Blake Ellis reports.

Need an extension? You can file for a six-month break by sending¬†Form 4868.You can also can do it on your smartphone by using Taxsoftware.com's Form 4868 Extension app, Ellis reports.

How to get more money back this tax season

Temperatures are expected to rise high enough during Monday's Boston Marathon that organizers are telling some runners that they might want to skip it.

With the day's high expected to be in the upper 80s, organizers say they'll allow people who qualified for the race to skip this year's event and carry over their qualification for 2013, CNN affiliate WBZ reported. The temperature will be lower at the start of the race but it still won't be ideal for people running 26.2 miles. The last time the event happened under similar temperatures, in 2004, hundreds of racers sought attention in medical tents.

The Boston Athletic Association, which organizes the race, is urging people who intended to run unofficially - those who didn't qualify but were going to run on the course anyway - to skip the race so that medics can focus on the 27,000 official runners, WBZ reported. The BAA also is hoping that runners with pre-existing medical conditions or those who have trained only in cool temperatures will not run on Monday.

A man accused of committing a mass killing that was the largest single-event loss of life in Norway since World War II will stand trial starting Monday.

Anders Behring Breivik is accused¬†of killing eight people in a bomb attack in Oslo, then going to Utoya Island outside the city and systematically gunning down 69 more people, many of them teens and young adults, at a Labour Party youth camp¬†on July 22.

Authorities have described Breivik as a right-wing Christian extremist.¬†Breivik claims the shooting rampage was a matter of self-defense, meant to save Norway from being taken over by multicultural forces and to prevent ethnic cleansing of Norwegians, his attorney has said.

The trial could last up to 10 weeks. Breivik has pleaded not guilty to¬†committing acts of terror and voluntary homicide, though he has admitted carrying out the attacks, according to the judge handling his case previously.

The U.S. government gets a second chance at trying former Major League Baseball pitching star Roger Clemens on perjury and other charges this week.

Clemens is accused of lying to Congress in 2008 when lawmakers investigated the illicit use of steroids in professional baseball. But the¬†case against him - involving one count of obstruction of Congress, three counts of making false statements and two counts of perjury - was declared a mistrial in July after evidence previously ruled inadmissible was shown in court.

The retrial in federal court is to begin Monday and is expected to last several weeks.

The charges stem from Clemens' 2008 testimony before the House Committee on Oversight and Government Reform, during which he denied using anabolic steroids.¬†Clemens has continually denied using performance-enhancing drugs during his professional baseball career.