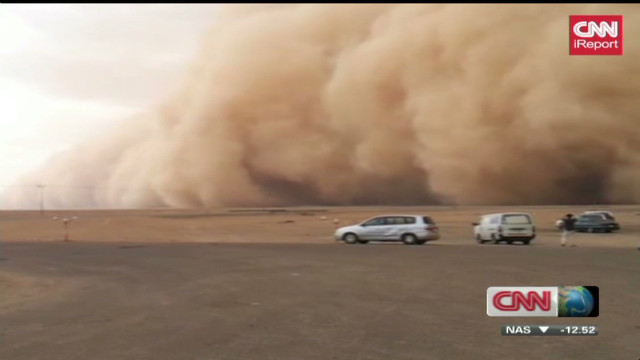 Hold on tight as you watch these videos! Photographers had to battle strong sand and dust storms to capture these eye-popping clips.  Our first "Gotta Watch" video was captured by iReporter Mujahid Latif as he watched a wall of sand blow through Riyadh, Saudi Arabia.

This meteorological phenomenon impacted a wedding in Arizona, too. See how the couple reacted when their wedding ceremony was suddenly covered in dust.

And a CNN reporter got a taste of one of these storms while shooting on location in Iraq. See him covered in dust as he tries to report from Camp Adder.

A sandstorm recently slammed into Saudi Arabia's capital, Riyadh, turning day into night with almost zero visibility. iReporter Mujahid Latif captured images of the weather phenomenon on his camera and shared them with CNN.

Gus and Jennifer Luna experienced a memorable wedding day after their outdoor nuptials were crashed by a huge sandstorm in Florence, Ariz., on Sept. 10, 2011.

Back in 2010, CNN's Fred Pleitgen tried to file a report from Camp Adder, Iraq, about the U.S. troop drawdown. He ended up getting covered in a cloud of sand and dust instead!

Back in July of last year, CNN affiliate KNXV captured stunning images of a dust storm making its way across Ariziona.