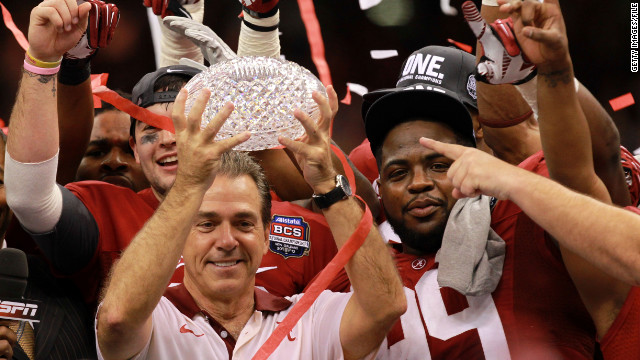 The roughly $30,000 Waterford crystal football that tops the trophy from the American Football Coaches Association fell and shattered on Saturday when the father of an Alabama player caught his foot on a rug where the trophy stood at Alabama's Mal Moore Athletic Facility, according to CNN affiliate WIAT and ESPN's Alex Scarborough.

The accident is said to have happened after the Crimson Tide's annual intrasquad spring game, which 78,526 fans watched Saturday at Bryant-Denny Stadium in Tuscaloosa.

Scarborough's Twitter accountÂ has a picture of what he says is a tiny piece of the broken crystal prize, made in Ireland.

Alabama was awarded the trophy after beating LSU 21-0 in the Bowl Championship Series title game on January 9.

Mel Pulliam, marketing director for the AFCA, which issues the trophy to BCS-winning teams, told CNN on Tuesday that Alabama would be responsible for paying for a replacement, and that he didn't know whether the university had insured the prize.

Alabama's sports information department didn't immediately return a call seeking comment. But Pulliam said the AFCA would work with a supplier "as fast as we can so that (Alabama) can display" a replacement.

"It's rare that these things happen. The trophies make hundreds of appearances and celebrations - itâ€™s got a pretty good track record," Pulliam said.

For Alabama, the celebration of January's BCS win goes on without the trophy. Members of the team collected their championship rings on Monday, and they will visit the White House for a traditional champions' visit with the president on Thursday.

A group of 11 artists and activists has claimed the prestigious Turner Prize after transforming a gallery space intâ€twitter.com/i/web/status/1â€¦OF
cnni

10:45 am ET December 2, 2021 RETWEET
Buying a cheap property in Italy is an attractive prospect for many travelers, particularly with the ever-growing nâ€twitter.com/i/web/status/1â€¦wh
cnni

10:29 am ET December 2, 2021 RETWEET
Sometime after Hernan Cortes conquered the Aztec capital of Tenochtitlan in modern-day Mexico City in 1521, an indiâ€twitter.com/i/web/status/1â€¦oZ
cnni