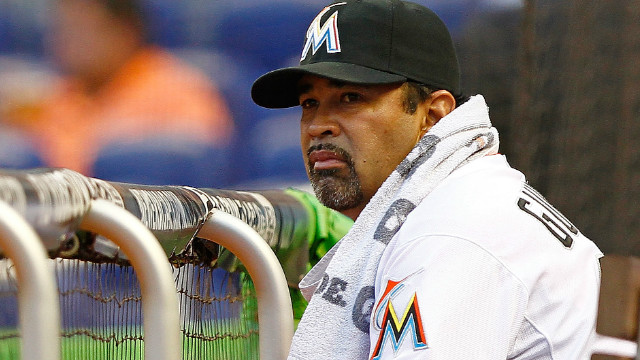 Manager Ozzie Guillen of the Marlins looks on during a game against the Chicago Cubs in Miami on Tuesday.
April 18th, 2012
01:05 AM ET

Manager Ozzie Guillen was back in the dugout Tuesday night after serving a five-game suspension imposed by the Miami Marlins for his comments praising former Cuban leader Fidel Castro and angering the city's sizable Cuban-American population.

"It's been a tough couple of days, you know what I mean?" Guillen, in his first season as Marlins manager, told reporters before a game against the Chicago Cubs.

"I feel proud of the players and the coaching staff because they play well - we wish they'd won a couple more games, but they ... went after their job very good, the way I thought they were gonna go about their business, and there's no one more excited than me to be back with them."

In an interview with Time magazine earlier this month, Guillen said, "I love Fidel Castro," adding, "You know why? A lot of people have wanted to kill Fidel Castro for the last 60 years, but that (expletive) is still there."