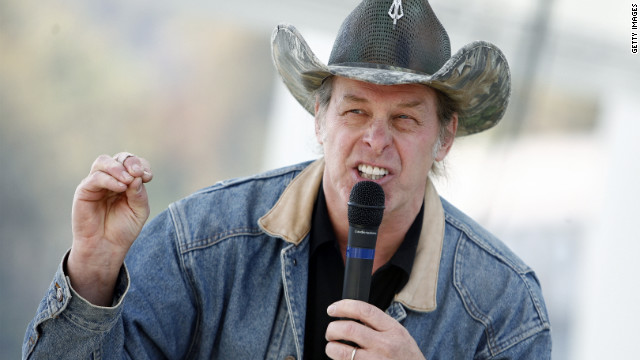 Overheard on CNN.com: How free should free speech be? Readers' views divided

Columnist LZ Granderson argues in an opinion article today that Ted Nugent's recent remarks about President Obama were thinly veiled threats and suggests that the rocker ought to be arrested, although he concedes there is little precedent for such a response. Our readers were divided on this view.

Ted Nugent should be in jail

Jason Asselin of Iron Mountain, Michigan, was outraged by Granderson's column. He said that arresting Nugent because of his remarks would be a violation of Nugent's right to free speech.

"I want to live in a world where you can speak your mind freely without fear of being arrested or imprisoned," Asselin said.

"Many people talk about locking Ted up for his comments. This is exactly what many countries do today: Lock people up for speaking their mind."

Some of our readers disagreed strongly with Granderson.

okie49: "I love the liberal ideas that I see here.  Curtail freedom of speech.  No guns.  Just dump the Constitution.  If you arrest Ted, then you need to arrest the New Black Panthers."

This commenter said he didn't think Nugent was actually threatening the president.

JohnnySeven: "Mr. Nugent was addressing members at a NRA convention. You could say that this is a 'pro-gun' crowd. President Obama has the reputation (deserved or not) of not being very friendly to Second Amendment issues. There is a presidential election coming up next November and obviously there is some angst among firearm owners about the incumbent president being re-elected and attempting to relieve good citizens of their firearms. Mr. Nugent was playing to the crowd. It is understandable that non-gun owners and others unfamiliar with the gun control controversy would misinterpret Mr. Nugent's statement.

Mr. Nugent never threatened to assassinate anyone. He was stating in so many words that if President Obama gets re-elected, he would probably go to jail if such a draconian measure was adopted as to require all citizens to surrender all one's firearms or go to jail. The part of his statement about being dead is a reference to an old NRA by-line 'They can have my firearms when they take them from my cold dead hands!' It is a metaphor for the resolve to oppose any negative firearm legislation. It is NOT a cry for rebellion or revolution! I have observed that Mr. Nugent is sometimes given to hyperbole for whatever reasons. He is either loved or despised even within the community of firearm owners. I think if Mr. Anderson would have taken a bit more time to research this subject matter, he may have arrived at a different opinion."

Argument 2: Free speech has an audience

Michael Brewer of Gowen, Michigan, says he served in the military for 22 years and is now disabled and supports free speech. At the same time, he said, Ted Nugent "didn't realize the audience he had."

"You have speech, but you don't have freedom of audience," Brewer explained. "You can say what you want, but if you say something to offend or hurt someone, you've got to understand what you're dealing with.'

He also felt that Nugent's comments were disrespectful to the president.

"He offended the president of the United States. He offended the position. The people, whoever they vote in, they expect that you respect the process. That's what's great about our country. He basically just threw our freedoms out the window by saying what he did."

Brewer said he feared that with our country's history of presidential assassinations and attempts, there is a danger in not taking the remarks seriously. These commenters thought there might be a possibility of inciting violence.

GailScottt: "It's this type of talk that led to Gabrielle Giffords getting shot. Nugent needs to put a lid on it."

mary1972: "Totally agree. Remember how Palin and the GOP backtracked after that lunatic shot Giffords."

One person suspected an undertone to the GOP.

buddhanature: "This is a classic in-your-face example of the violent extremist wing of the Republican Party. They try to hide it from prime-time TV, but it's always there simmering under the covers. Dems would criticize Bush for his policies but there wasn't this level of open threats of violence or racism. Barack Obama was fairly elected by a majority of voters. You don't have to like his policies, but you have no right to threaten his life or promote violence."

Another said they didn't think the statement was appropriate.

Midloo: "How can anyone respect a man that threatens the life of our leader? I detested Bush's policies, but I would never use such rhetoric. It's low ... it's ignorant ... it doesn't show any regard for the America so many conservatives profess to love."

What's your point of view? Share your opinion in the comments area below and in the latest stories on CNN.com. Or sound off on video via CNN iReport.