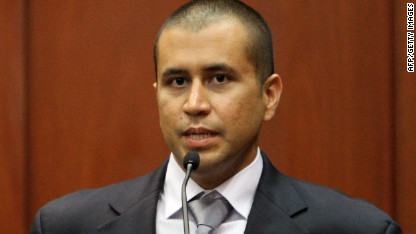 George Zimmerman testified, along with his wife and parents, at a bail hearing Friday in Sanford, Florida.
April 20th, 2012
08:36 PM ET

Some new details emerged from the hearing during which a Florida judge set a $150,000 bond for George Zimmerman. Readers have been assessing the information, and they're telling us they aren't quite sure what to make of the Trayvon Martin case. Since some of the most critical information in the case has not been released publicly, it's difficult to make a judgment. Many of our commenters felt that both Zimmerman and Martin's stories are sad.

Four words that describe Zimmerman. This case doesn't meet the standard for murder, it probably meets the standard for manslaughter. I do not believe Zimmerman intended on shooting anyone, I do beleive that his actions were sufficient for Trayvon Martin to feel threatened. Very sad, Zimmerman thought Trayvon was a criminal, Martin thought Zimmerman intended him harm. One is dead and one has ruined his life. Should have just let the cops handle it. Thanks to the NRA pushing laws that Law Enforcement Officers have repeatedly opposed because of this exact reason we now have one life ended and one life ruined. I can empathize with both, I am sure that will (anger) a few of you."

The replies were along similar lines, with this reader saying no one wins from the situation.

userjoe9066: "Very well worded, pretty much matches up with what I feel right now, it's just a no win situation even if they public gets what they want and Zimmerman gets hung or whatever happens to him it won't bring back Trayvon, there really is no winner in this situation. Hope it works out somehow though. I empathize with both sides."

This person said they fear "Stand Your Ground" laws, but don't know what to make of the case.

KellyinMN: "I can't say whether second degree murder or manslaughter is more appropriate, since I don't have access to all the evidence, just as you don't. With that said, I agree that I can sympathize with both (I can't empathize since I've never been shot or shot someone). It's a very sad situation which likely could have been prevented had the NRA not been allowed to push their dangerous laws. They tried passing a "Stand Your Ground" law similar to Florida's in Minnesota, but our law makers took law enforcements concerns and chose to only allow for the SYG type force in your home, car, RV, and tent (camping). I applaud their restraint and am proud they didn't bow to the NRA like so many other states have."

What information makes the difference in this case?

wodley: "We cannot pass judgment now whether it's manslaughter or not before knowing all the facts. The important thing is to prove forensically whether Zimmerman shot Martin while his head was being slammed on the concrete or whether he shot him from a distance. If it's the first, then it's self-defense. If it's the second, then it's second-degree murder."

This reader said they feel a second-degree murder charge is too much.

caliconor: "I agree with the original poster. I think Zimmerman was foolish, but he wasn't out to kill anyone. He was out doing a service for the community and was attacked. It sucks that someone died, but this was one of these circumstances where everything went wrong and it did. He's guilty of manslaughter, not murder. Wrongful dead lawsuit? More than likely. But 2nd degree murder? That's pretty ridiculous."

This is only a portion of the conversation that took place. What do you think? Share your opinion in the comments area below and in the latest stories on CNN.com. Or sound off on video via CNN iReport.