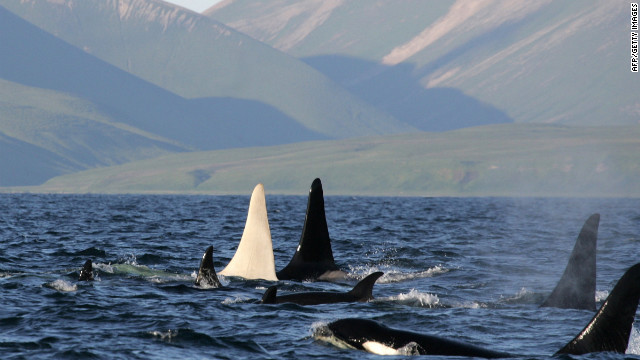 The world's only known all-white male killer whale has been spotted in the Pacific Ocean off Russia, scientists announced Monday.

The orca, dubbed "Iceberg" by the scientists, was spotted swimming with a pod of 12 others. Iceberg has a 6.5-foot-high dorsal fin and is at least 16 years old, according to a blog post by Erich Hoyt, co-director of the Far East Russia Orca Project.

Check out a photo gallery of albino creatures

The pod was spotted by scientists from universities in Moscow and St. Petersburg in the waters around the Commander Islands off the Kamchatka Peninsula. The area is part of a marine reserve.

Hoyt wrote that two other white orcas have been seen in area, but that Iceberg is the first fully grown male.

â€śIn many ways, Iceberg is a symbol of all that is pure, wild and extraordinarily exciting about what is out there in the ocean waiting to be discovered,â€ť Hoyt said in a statement.

Hoyt wrote that researchers will return to the waters where Iceberg was spotted this summer in hopes of finding the creature again and determining whether he is an albino or if there is some other reason for his white color.

The researchers hope the presence of Iceberg will help efforts to expand marine reserves along the Russian coast, they said in the statement.