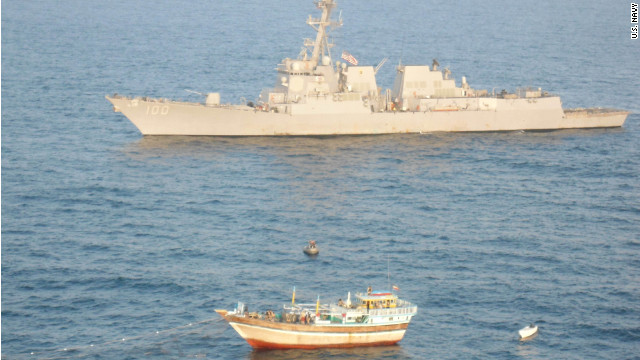 Pirate attacks down off Somalia, up off Nigeria

Pirate attacks off the coast of Somalia have decreased dramatically this year, but the number of incidents off Africa's west coast is increasing, and piracy is becoming more violent there, the International Maritime Bureau reported Monday.

There were 102 incidents of piracy and armed robbery during the first quarter of 2012, according to the agency, part of the International Chamber of Commerce.

Forty-three of those were attributed to Somali pirates, a decrease from 97 in the first quarter of 2011. Nine vessels were hijacked in the area, a decrease from 16 in the period a year earlier. Pirates took 144 crew members hostage off Somalia during the quarter, according to the report.

The bureau credited international navies, which have staged both reactive and pre-emptive strikes against pirates in the region, for the decrease in piracy off Somalia. It hoped for continued progress.

â€śThe (European Union) announcement to expand their anti-piracy mission to target pirates ashore is another welcome move that could further threaten the Somali piracy model,â€ť Pottengal Mukundan, director of the IMB Piracy Reporting Centre, said in a statement.

While progress was made off Africa's east coast, piracy off Nigeria on Africa's west coast was growing, the report said.

Nigeria-based pirates were behind 11 attacks in the first quarter, the bureau said. Only 10 pirate attacks were reported off Nigeria all of last year, it said.

â€śNigerian piracy is increasing in incidence and extending in range,â€ť Mukundan said in a statement. â€śAt least six of the 11 reported incidents in Nigeria occurred at distances greater than 70 nautical miles from the coast, which suggests that fishing vessels are being used as motherships to attack shipping further afield.â€ť

Pirate attacks also increased off Indonesia during the quarter, the bureau reported, with 18 vessels attacked, up from five a year earlier. Robbery is the main target of those attacks, the bureau said.

6:01 pm ET October 17, 2021 RETWEET
San Andres is one of Colombia's most popular beach destinations in the country. Meet the local entrepreneur and divâ€twitter.com/i/web/status/1â€¦3G
CNNweather