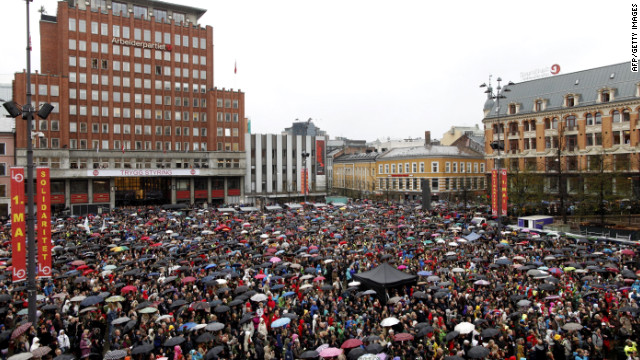 Breivik, whose trial in Oslo City Court began last week,┬Āboasts of being an ultranationalist who killed his victims to fight multiculturalism in Norway.

Thursday's event, which included a march to the courthouse to drop roses outside,┬Āwas ŌĆ£a beautiful, touching scene,ŌĆØ said Geir Engebretsen, the┬Ācourt chief justice┬Āin charge of Breivik's terror trial, according to a report on Views and News from Norway.

"ItŌĆÖs a very moving manifestation of Norwegian culture," Engebretsen said, according to the report, which cited Norwegian broadcaster NRK.

ŌĆ£I think this just shows that people felt a need to show their feelings, to make an expression of how they value the Norwegian democracy. ItŌĆÖs fantastic," Views and News quoted┬ĀLabour Party Secretary Raymond Johansen as telling NRK.