The US recorded more than 1.65 million southern border arrests over the past year, breaking the previous record setãtwitter.com/i/web/status/1ãÎqV 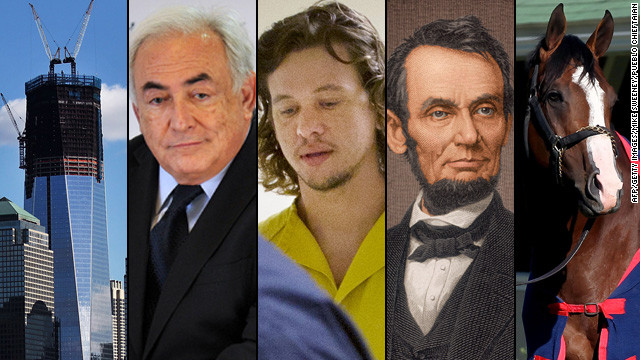 The placement of a column of the 100th floor will bring the new One World Trade Center tower to a height of 1,271 feet - 21 feet taller than the Empire State Building, the Times reports.

Built on what was once referred to as ground zero in Lower Manhattan, the building is expected to reach 1,776 feet when it is finished by early 2014. The Willis Tower in Chicago, formerly known as the Sears Tower, is the country's current record holder at 1,450 feet.

Will housekeeper's lawsuit against Strauss-Kahn be tossed?

Former International Monetary Fund chief Dominique Strauss-Kahn will learn Tuesday whether he's free of a civil suit brought against him by the New York hotel housekeeper who accused him of assaulting her last year.

Strauss-Kahn's lawyers asked a judge to dismiss the case in March, arguing Strauss-Kahn had diplomatic immunity. He resigned his position soon after his arrest by New York police in May 2011, when he was charged with criminally assaulting housekeeper Nafissatou Diallo in a Manhattan hotel suite.

Diallo accused Strauss-Kahn of attempting to rape her when she walked into his suite, and Strauss-Kahn abandoned plans to run for president of France because of his arrest. But New York prosecutors dropped the criminal case because of credibility issues they cited in Diallo's account.

A few court cases that have made national headlines are expected to resolve or begin the trial phase this week.

In one case, three siblings accused of robbing a bank and trying to kill police officers in a multistate spree last year are expected to be sentenced Monday for charges to which they pleaded guilty in Colorado.

The Dougherty siblings - Lee Grace,ô  and her brothers Dylan and Ryan - are accused of committing an armed bank robbery in Georgia and attempting to kill a Florida police officer on August 2. They escaped from Florida with police in pursuit after they shot out a police cruiser's tire, and they were arrested the next week after a high-speed chase in Colorado, according to authorities. The siblings still face federal charges in the bank robbery, as well as charges in Florida.

Also Monday, a Florida millionaire who legally adopted his 42-year-old girlfriend after he was accused of drunken driving in a fatal wreck is expected to be sentenced. John Goodman, who founded International Polo Club Palm Beach, was found guilty last month of DUI manslaughter and vehicular homicide.

Authorities accused him of driving drunk, hitting another vehicle and running it off the road into a canal, where its driver was later found dead in his submerged car. The subsequent adoption of his girlfriend made her eligible for money from Goodman's children's trust fund, which is mostly shielded from punitive damages should the crash victim's relatives successfully sue Goodman.

A man accused of stabbing 18 people - killing five -ô in three states is expected to face trial Tuesday inô  one of the deaths in Michigan.

Elias Abuelazam is accused of stabbing people,ô  most of whom were African-American,ô  in Michigan, Virginia and Ohio between May 2010 and August 2010.ô  If convicted of murder in Michigan, Abuelazam could face life in prison without parole. The state does not have the death penalty.

Authorities say he was trying to board an international flight in Atlanta when he was arrested in August 2010.

Seven score and seven years ago ...

A piece of dark American history can be yours, if the price is right.

An online auction for President Abraham Lincoln's opera glasses, which he is said to have held as he was assassinated atô Ford's Theatre in Washingtonô in April 1865, is set to end at 5 p.m. PT Monday (8 p.m. ET).

The glasses passed from a Washington City Guard officer to the estate of magazine publisher Malcolm Forbes in the late 1970s, though the current owner is anonymous, Bloomberg News reported. As of Sunday morning, the most recent bid on the site of Los Angeles-based online auctioneer Nate D. Sanders wasô $277,841.

Collectively, the experts at Churchill Downs seem to think Union Rags, a descendant of 1964 Kentucky Derby winner Northern Dancer, has the best chance of winning Saturday. The colt has finished in the top three at five preparatory races since August, including three victories.

The last horse to win the Triple Crown - meaning victories at the Kentucky Derby, the Preakness and the Belmont - was Affirmed in 1978.

Asked whether he would entertain the notion of getting rid of the filibuster for voting rights legislation, Presideãtwitter.com/i/web/status/1ãÎEq
sarasidnerCNN

10:04 pm ET October 21, 2021 RETWEET
I am told he is in stable condition in the ICU. Survival is possible. But multiple bullet wounds usually means a teãtwitter.com/i/web/status/1ãÎ8I
sarasidnerCNN

9:24 pm ET October 21, 2021 RETWEET
Texas' Republican Governor kept his promise & cut a check to someone who found voter fraud according to theãtwitter.com/i/web/status/1ãÎNz
sarasidnerCNN