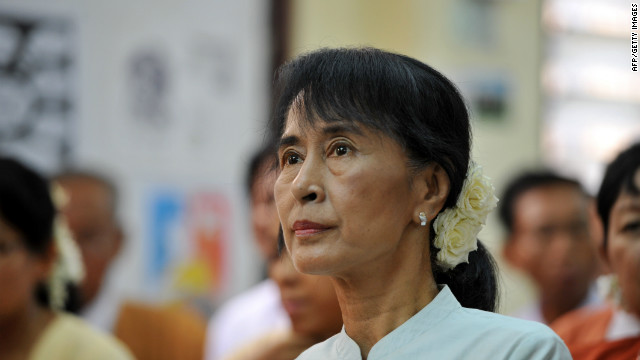 Aung San Suu Kyi's party has asked that the wording of an oath that lawmakers have to take be altered.
April 30th, 2012
03:32 AM ET

The Myanmar opposition leader Aung San Suu Kyi said Monday that she would take a swearing-in oath at the country's parliament, apparently resolving an impasse that had been preventing her from taking up her seat in the legislature.

"I will go to the parliament because there is a demand of people who voted for me," Suu Kyi said after meeting with party members.

She and 42 other newly elected members of her party, the National League for Democracy, had been delaying their debuts in parliament because they objected to the wording of the oath they would have to take.

The NLD had asked authorities to amend the oath to say that parliamentarians will "abide by" the constitution rather than "protect" it. But the government of President Thein Sein didn't appear to show any sign of moving to accommodate the request.

Suu Kyi said Monday that she would "take an oath for the country and for the people."

WPost: â€śThe confirmation of the meeting provides new evidence of the success that the presidentâ€™s allies had in gtwitter.com/i/web/status/1â€¦XyWBri
susancandiotti

WPost: â€śThe confirmation of the meeting provides new evidence of the success that the presidentâ€™s allies had in gtwitter.com/i/web/status/1â€¦XyWBri
susancandiotti