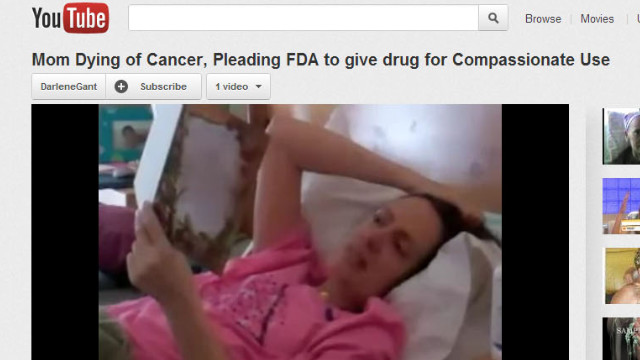 Darlene Gant sat in her hospital bed, barely able to lift her head. She was writing letters to her 11-year-son for his upcoming birthday, his eventual high school and college graduations and even a future marriage.

"Did you always know I loved you?" she wrote in a card meant for his 12th birthday. "Of all the things in my life I could have or should have done differently thereŌĆÖs one thing IŌĆÖd never change, having you as my son."

Gant, 46, who is suffering from stage-four breast cancer, has been told she doesn't have long to live. She worried she wouldn't be around to see her son grow up despite a trial drug that could prolong her life.

That drug, pertuzumab, was scheduled to be released in June when the Food and Drug Administration was expected to approve it. But Gant wouldn't have that long, doctors said.

So she posted a video on YouTube pleading for the early release of the drug under compassionate use, which allows for an unapproved drug to be used if no other treatment is available.

In the video, she holds up a slew of cards for her son for those future occasions to show what she would miss if she couldn't get the drug.

"WeŌĆÖre planning out cards and videos and books and passing on our final words and trying to raise our kids from beyond," Gant said as tears stream down her face. "How sad is that?"

The moving video, which has more than 30,000 views on YouTube, and Gant's story were quickly picked up by media companies around the world.

And then the phone lines of Genentech, the company┬Ābehind the drug, began ringing off the hook.

It agreed to release the drug, and Gant began her first dose last week.

"My dream is hopefully this video would wake somebody up to think," she says in the video.

And it appears her dream, at least for now, is partially┬Āfulfilled.

Now she's hoping the drug will help give her a better quality of life, even if she lives a little longer until Mother's Day. Perhaps, she can make it to October and give her son a birthday card herself.

"If it gave us two months or a year, thatŌĆÖs priceless for a family," she said.

Gant said she had seen so many of her friends die from breast cancer, including her sister-in-law at age 36.

"It's not normal to have a 30-year-old woman with three young kids around a casket peeking in and crying,"she said. "And IŌĆÖve seen it too many times."

Gant said she hopes whatever happens, her story brings attention to the need for more treatments, trials and research to combat cancer.

After all, she said, it's not just her suffering.

"ThereŌĆÖs too many of us dying," Gant said.