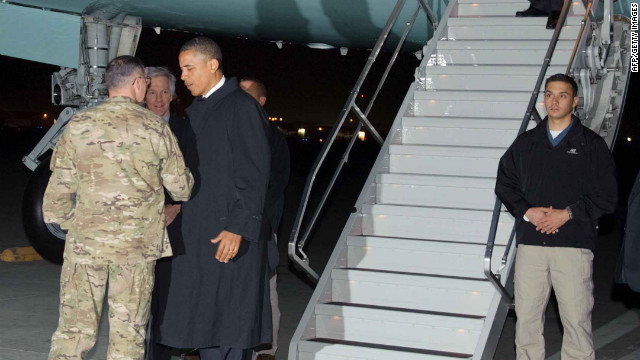 President Barack Obama is greeted at Bagram Air Base, Afghanistan, shortly after landing at about 10:20 p.m. local time Tuesday.
May 1st, 2012
07:43 PM ET

Obama in Afghanistan: U.S. must 'end this war responsibly'

[Update, 7:43 p.m. ET] U.S. President Barack Obama, speaking at Bagram Air Base in Afghanistan, said in a U.S.-televised address that "the goal that I set to defeat al Qaeda and deny it the chance to rebuild is now within our reach."

By the end of 2014, Afghans will be fully responsible for the security of their country, he said.

"I will not keep Americans in harm's way a single day longer than is required for our security, but we must finish the job we started in Afghanistan and end this war responsibly," Obama said.

During the visit, Obama and Afghanistan President Hamid Karzai signed a Strategic Partnership Agreement that outlines cooperation between their countries after the withdrawal of U.S.-led international forces in 2014.

[Update, 4:07 p.m. ET] U.S. President Barack Obama and Afghanistan President Hamid Karzai on Tuesday signed a Strategic Partnership Agreement that outlines cooperation between their countries after the withdrawal of U.S.-led international forces in 2014.

On his third trip to Afghanistan since taking office, Obama will meet with Afghanistan President Hamid Karzai and make a televised address from Afghanistan at 7:30 p.m. ET.

Tuesday's visit comes at a particularly delicate time in relations between the United States and Afghanistan. The countries have been negotiating a strategic agreement that would outline the basis for U.S.-Afghan cooperation after most U.S. and allied troops withdraw in 2014.

Obama and Karzai are expected to sign the agreement on Tuesday.

More than 130,000 troops from 50 countries serve in Afghanistan, according to the NATO-led International Security and Assistance Force. The United States is the biggest contributor, providing around 90,000 troops, followed by the United Kingdom (9,500), Germany (4,800) and France (3,600).