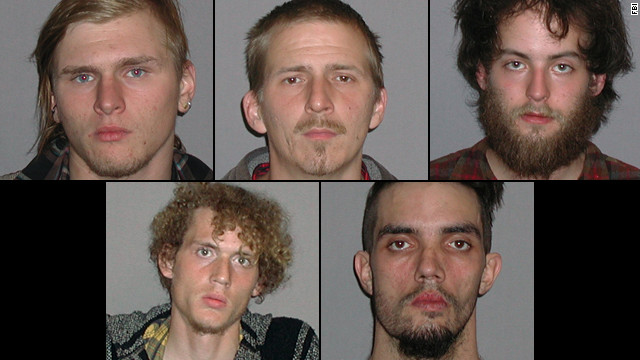 Overheard on CNN.com: Politics of anarchy

One of the most talked-about stories on Tuesday was about five men arrested for allegedly conspiring to blow up a bridge about 15 miles south of Cleveland, according to court documents released Tuesday. Authorities say at least three of the men are self-proclaimed anarchists, and a lot of readers pondered what kinds of philosophies the men held and how they could be classified politically.

Readers speculated about the political backgrounds of the men. Several readers suspected they might identify with the Occupy movement, but some had other ideas.

BobRoss: "I love how some of these leftists try to deny reality (aka lie) by saying that anarchists are from the 'far right.' All of the major anarchist movements have been led by leftists and have been closely aligned with Marxism. By the statements for these guys it is clear that they are not in any way libertarians or 'right wing,' but sincere anarchists. I can understand though. I would try to deny their affiliation if I was you also. My guess is the Occupy Wall Street crowd is going to enter into a full PR campaign to distance themselves from these guys."

djfl00d: "Two flaws with your argument: Anarchists are anti-government. This is hardly a far left ideology, rather is closer to a far right ideology, yet is still inaccurate because if anarchists are anti-government, they are anti-political. Secondly, you have to think of politics as a circular scale, not a linear one. If you lean too far to either the right or the left, you begin to incorporate ideology from the other side."

Samilcar: "I'm certain these guys aren't connected to any Occupy groups. They all look like those violent tea partiers."

We heard from a lot of people who said it's not possible to know the men's affiliations at this point.

SavoryBrown: "It's definitely Obama's fault ... well, or maybe it was the tea party's fault. But either way it was definitely either the left wing or the right wing, for sure. There is no way it was just a few crazy people. Most assuredly, it was the fault of the political party I align with the least."

stateschool: "Although the FBI is providing no details, the sleuths in the comments section have already determined that the would-be bombers are Muslim Christian anarchist communist liberal conservative tea bagger Republican Democrat FBI agents."

Are conclusions about the men's views too self-serving, or do they hold merit?

pinetree51: "7ruthere wrote: 'Funny how the liberals are saying, "these guys are conservatives!!" and the conservatives saying, "these guys are liberals!!' That's because we live in a two party political system which closely resembles a sporting event. Since many Americans are so sports-driven, you are either on one team or another in their eyes. One team = good. Other team = bad. No other nuances or variations are possible in the sports world. Two teams. That's it. You are one or the other. Like dealing with grade school children."

TommyNIK: "Very well-said. It's the old 'black and white, no shades of gray' argument. There are shades of gray. It generally takes people of intellect both to recognize this fact and also to deal with it in a sane manner."

Who is the responsible party here?

Trilithium: "This is all Obama's fault."

Icreatejobs: "I blame their barber."

If you're an anarchist, does that create additional problems?

Mike Drake: "The problem with anarchy is that it's very difficult to enforce."

sumguy2006: "It's funny when 'anarchists' try to organize something. Pretty much doomed to failure from the start."

A few of the commenters were critical of the sting operation.

Branamsays: "I agree. People say and do strange things under the influence of meth. These guys don't look like they could start a campfire, let alone blow up a bridge."

Cleveland, Ohio, can't get a break.

tequilala: "A bridge in Ohio is the first thing I would think of to blow up."

clemjones: "These guys were just trying to help the economy of Cleveland. If they blow up the bridge, it will put people to work, rebuilding it, burying the dead and planning how to stop future attacks. It's the same as Pelosi's philosophy on how unemployment stimulates the economy."

judahMaccabee: "If I was stuck in Cleveland, I'd probably be ready to blow up something too."

WatAnon: "They'll have plenty of time for that with their new friends soon."

Some people couldn't get past the hair.

pOdPeOpLe: "Saw these guys play Coachella. They were pretty good."

astounded1: "Didn't they call themselves The Spin Doctors in the '90s?"

ENDFEDNOW: "So this is what happens to washed-up boy bands?"

tinwatchman: "Well, at least now we know what happened to the other members of N'Sync."

foreverwar: "Seems like they all get their hair cut by the same lawn service."

Or, maybe they're something far more sinister.

justincase04: "I'm pretty sure those are my sister's past five boyfriends ..."

What's your take on this story? How would you classify anarchists? Share your opinion in the comments area below and in the latest stories on CNN.com. Or sound off on video via CNN iReport.