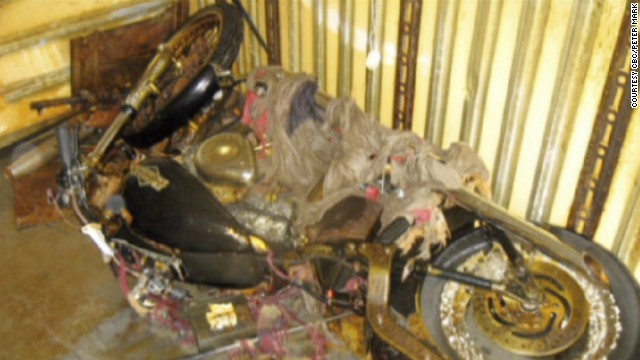 Ikuo Yokoyama, 29, of Yamamoto, Japan, says a Harley-Davidson representative tracked him down after the Canadian Broadcasting Corp. ran a story about the bike, which was found in a storage container on British Columbia’s Haida Gwaii islands, the CBC reported.

Yokoyama, who NHK reported lost three family members and his home in the disaster, said he was "so glad that (the motorcycle) will be returned to me.”

“I would like to thank the man who found my bike in person,” Yokoyama said in an NHK interview aired on the CBC.

“First I thought, this has got to be the craziest thing anyone has ever found,” Mark told the CBC. “Then I looked a little closer and the license had Japanese writing on it. The wall of the trailer had Japanese print on the tags. And the first thing that popped into my head was this is likely from the tsunami in Japan.”

Last month, CNN reported that a soccer ball found washed up on a remote Alaskan beach apparently belongs to a Japanese teenager. And the U.S. Coast Guard fired on and sank a rust-stained fishing trawler - swept from Japan by the tsunami - in Alaskan waters, saying that the unmanned vessel was a hazard to mariners.