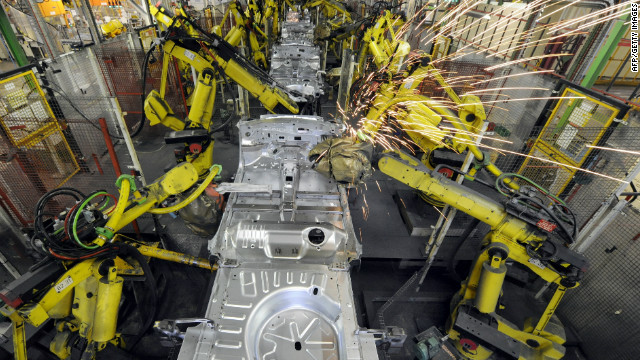 Could robots be doing your job someday? Share your thoughts in the comments area below.
May 2nd, 2012
07:37 PM ET

Overheard on CNN.com: If robots take over, what happens to money, leisure time?

Wired magazine co-founder Kevin Kelly made a provocative assertion that future generations may deem some kinds of work we do today "inhumane" and reserve it for robots instead. We discussed the posting on CNN's What's Next blog and got some interesting responses from the community of what we assume to be human readers.

The Big Idea: Robots should take our jobs

Some readers opined there could be a major shift in power distribution if robots were allowed to take over jobs.

Matt: "For whoever reads this, the problem isn't technological progress and the gradual replacement of laborers with machines. The problem is the current socio-economic paradigm. Unfortunately, whoever owns the machines of production or the capital that it takes to produce, maintain, and supply them are the ones that will never have to worry about being unemployed. They are the ones, along with political figures, that hold the true power. With AI on the horizon, more jobs, even those that we consider safe, will have laborers either replaced or manufacturing transferred to areas that have cheaper labor."

What if wages and payroll as we know them suddenly went away?

allenwoll: "Folks, For 250 years, machines have been 'taking our jobs.' The result : Unprecedented prosperity, periodically interrupted by 'economic shoals' as is now the case. This continuing process has been termed 'the Industrial Revolution.' This revolution will inevitably continue. Remember, the only reason that a good or service costs money is that human labor is involved. Take out ever, ever more of the human labor (and curtail enterprise greed) and costs go down and down toward an eventual near-zero. The only problem will be to figure out how to equitably distribute goods and services without the use of the present 'wage-salary score card' ... that will not be easy ! Go on, think about this. It will give you a really bad headache, but there it is! We will not see it, but our children will!"

Will humans do more or less work as automation increases?

jdoe: "Some time ago (I think in the '60s), experts predicted that with continuing technological advances and increased productivity, the work week would shorten to 20 something hours. Instead, the opposite happened. Americans work longer hours than ever. Two parents must now work just to make ends meet, whereas one parent used to suffice. Americans, at least the middle class, certainly have seen any real tangible benefits of automation. Quite the opposite. Not to sound pessimistic, but I'm not so sure the future will be much different."

Maybe the robots will bring us independence.

Dean: "Until such time as Artificial Intelligence truly comes into existence, it will be humans that program 'Robots' to actually do anything. It will take humans to run diagnostics and perform repairs when they break down ... and it will take humans to decide where more robots are needed to increase productivity or solve a problem. Just like the computer on your desk, if you don't put intelligence into it, you can't possibly get intelligence out of it. That is, of course, unless you think that all 'intelligence' exists online. The one thing that sets human beings apart from robots and even other animals is that we have the ability to rapidly adapt to change, develop ideas that respond to some need, and work together as a global species to achieve a common goal. The problem, in my humble opinion, is that many of us have come to rely solely upon technology or in some cases governments to solve all our problems and thus have become dependent. Now, instead of relying upon our ability to think and solve our own problems or create our own opportunities for growth and prosperity, we depend upon government or technology to do that for us."

What about population? And is it time to kill out the 40-hour work week?

old gaffer: "I see two issues that will need addressing – and perhaps they're really problems that need solving – if we are to progres to the next level of realized society. First, we absolutely HAVE to control population. i think it's a fact that there are simply too many people competing for too few resources on this planet. Second, the employment model that is based on a 40 hour work week is obsolete. Maybe instead of 100 million people with 40 hour/week jobs, we should use a model of 200 million people with 20 hr/wk jobs (adjust numbers to suit – this is for illustrative purposes only). Of course, that doesn't address the entrepreneur who will work 100 hours a week in the hopes of achieving some level of success (whatever that means) not generally delivered in whatever the "full-time employment" model delivers, but it doesn't matter because that person isn't an employee in the classic sense anyway. If we continue to overpopulate our resources, it won't matter what the work week looks like because we'll be fighting one another for food, shelter, and water."

jdoe: "Population is not the problem. We have the capacity and technology to feed everyone in the world. We just do not implement it evenly. And population tends to stabilize as society modernizes. Some Western countries are actually experiencing population decline. Yes, it would be nice to have a shorter work week, so that everyone can enjoy the fruit of increased productivity. But there's also the likelihood of making workers work longer hours than ever before, while others go unemployed or underemployed. We're seeing that trend in America."

Spock: "There are two films that indicate the progression of the human race; Star Trek and Minority Report. Minority Report is an indication of tracking, controling and the worst of what machines and technology can and will do. And Star Trek showcases the eventual progression of society as a whole. It has already predicted cell phones, touch screens and tablet computers. In addition, nobody earns compensation and there is no economy. People work to enlighten themselves and society as a whole. The future will be a combination of these two since history has shown us that humans tend to gravitate to the worst."

There may be no ignoring robots.

TimS: "My company designs and builds custom automated manufacturing equipment, with many platforms utilzing various forms of 'robots.' All this automation does accomplish many things, with the greatest gains being repeatable and repoducible process capability, higher quality, lower scrap rates, and thus lower costs. In the overall scheme, in factories with high labor costs, automation is the name of the game for high volume production. In factories with low labor costs, semi-automatic or totally manual labor is the economic solution. Product cost is tied to overhead, materials, labor and equipment costs. The bottom line trend is the manufacturing factory is becoming more and more automated and higher-tech. If people can maneuver smart phones and the like, then I think the brain power is out there for the high-tech factory worker. Mankind is evolving. The last 100 years shows the exxponential rate of our technological growth."

But there's also a long way to go.

Eddie: "I can't wait till robots take over. Things will be so much cheaper. Granted, nobody will have a job to buy those things. But at least the few that do have a job will be well off."

jdoe: "We're already there, except that today's robots are called Chinese workers."

More time to be humans?

a16ie: "So that we can have more time with what matters most. God, family and friends relationships."

jdoe: "Robot workers are not the problem. The problem is that, as a society, we insist that people spend most of their waking hours toiling away at a job most don't enjoy, in order to make a living."

Perhaps there will even be robot commenters to go with the robot journalists.

Dave: "We could even program robots to argue over the pros and cons of the news stories, and misspell every other word to make it more entertaining for the rest of us."