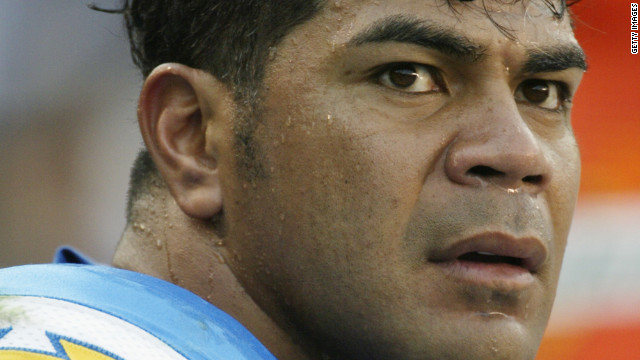 [Updated at 3:43 p.m. ET] Talking to reporters outside Seau's home, a distraught Luisa Mauga Seau, the ex-player's mother, repeatedly thanked those who had shown love to her son.

"I pray to God, take me! Leave my son! But it's too late," she said in tears as those nearby tried to console her.

[Updated at 3:34 p.m. ET] The Oceanside, California, police chief says Junior Seau's death is being investigated as a suicide.

Authorities received a call from a woman who said she was his girlfriend. She said she found the former Pro Bowler unconscious with a gunshot wound to his chest Wednesday morning, Oceanside Police Chief Frank McCoy said in a news conference.

Police officers and firefighters went to the house and found him in one of the bedrooms. They tried to revive him, to no avail, McCoy said, adding that a handgun was found near Seau's body.

[Posted at 3:18 p.m. ET] The San Diego Chargers issued a statement on their website regarding "the passing" of their former Pro Bowl linebacker Junior Seau, who reportedly killed himself in his Oceanside, California, home Wednesday.

"Everyone at the Chargers is in complete shock and disbelief right now. We ask everyone to stop what they're doing and send their prayers to Junior and his family," the statement said.

After TMZ and other media outlets reported a police presence at his home early Wednesday, the Chargers tweeted that they had no information on the matter. Minutes later, they announced that a conference call with Coach Norv Turner had been canceled before issuing the statement on Seau's passing.

"The outpouring of emotion is no surprise," the team tweeted shortly after 3 p.m. ET.

Seau played 20 seasons in the NFL, 13 of which came with the Chargers. He played his last seven seasons with the Miami Dolphins and New England Patriots.

A group of seven US senators met on Monday with Ukrainian President Volodymyr Zelensky in the capital of Kyiv amid‚Ätwitter.com/i/web/status/1‚Ä¶zX
cnni

7:13 pm ET January 17, 2022 RETWEET
The parents of Austin McEwen, one of the six victims killed after a tornado pummeled an Amazon warehouse in Edwards‚Ätwitter.com/i/web/status/1‚Ä¶dQ
cnni

6:41 pm ET January 17, 2022 RETWEET
Watch how noodles, rice and burgers are prepared and delivered by robots at the Beijing Olympics Village.‚Ätwitter.com/i/web/status/1‚Ä¶ov
cnni