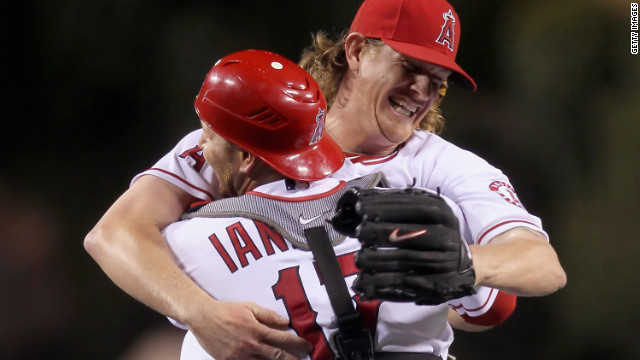 Jered Weaver of the Los Angeles Angels of Anaheim celebrates with catcher Chris Iannetta after throwing a no-hitter against the Minnesota Twins on Wednesday.y 2, 2012 in Anaheim, California.
May 3rd, 2012
07:09 AM ET

Weaver missed a perfect game by two batters, with Chris Parmelee reaching base in the 2nd on a passed ball after a strikeout, and Josh Willingham walking in the seventh.

Weaver, 29, is a Southern California product, hailing from Northridge and attending Long Beach State, and he had plenty of personal support among the 27,288 in the stands Wednesday night.

"It was unbelievably neat to get it in front of friends and family," Weaver was quoted as saying by ESPN LA.

Weaver's father, Dave, was in the stands.

"I get so nervous sometimes I have to go stick my head in a toilet," Dave Weaver said, according to a Los Angeles Times report. "It gets so nerve-racking, and he's been close before. But after 8 1/3 innings, I figured he'd have a chance."

The victory moved Weaver to 4-0 on the season and lowered his earned run average to 1.61.

"It still hasn't totally sunk in yet," he said on the field after the game, according to a report in the Orange County Register. "It's so surreal."

The first no-hitter of the 2012 season was on April 21, when Philip Humber of the Chicago White Sox shut out the Seattle Mariners 4-0. Humber's win was a perfect game, meaning no Mariners reached base.