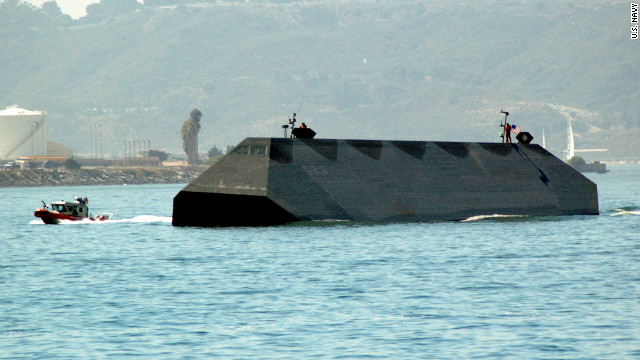 Here's your chance to own Navy stealth ship

You've got about 24 hours to get your bids in on a piece of super-cool Cold War hardware - a stealth warship the government no longer wants.

The General Services Administration is taking bids on the U.S. Navy's Sea Shadow, built by Lockheed Martin in 1983 for the Navy to test radar-evading capabilities and other weapons systems. The ship has outlived its usefulness, and the Navy is trying to unload it to avoid maintenance costs, the Los Angeles Times reports.

"It is not cost-effective for the Navy to maintain the ship in an inactive condition any longer, and the ship no longer serves any operational or research purpose," Navy spokesman Christopher Johnson told the Times. "Our only disposition option is dismantling and recycling."

Which means if you submit the highest bid, you won't be taking the 118-foot-long, 499-ton Sea Shadow for a three-hour tour with Gilligan and the Skipper.

"The ex-Sea Shadow shall be disposed of by completely dismantling and scrapping within the U.S.A. Dismantling is defined as reducing the property such as it has no value except for its basic material content," read the conditions on the GSA auction site.

That seems to have dampened the interest of evil madmen bent on world domination. (The Sea Shadow is said to be the inspiration for the villain's vessel in the 1997 James Bond film "Tomorrow Never Dies.")

The winning bidder will have to pick up the prize from the Maritime Administration National Defense Reserve Fleet at Suisun Bay, California.

The Sea Shadow comes complete with a covered barge/floating dry dock, so once you bust it up you will have a keepsake to remind you of what could have been.

12:30 am ET September 25, 2022 RETWEET
Actor and wrestling legend John Cena has completed a new accomplishment: breaking the world record for most wishesŌĆtwitter.com/i/web/status/1ŌĆ”nH
cnni

12:30 am ET September 25, 2022 RETWEET
Actor and wrestling legend John Cena has completed a new accomplishment: breaking the world record for most wishesŌĆtwitter.com/i/web/status/1ŌĆ”nH
cnni