Lawyers for US basketball star Brittney Griner have filed an appeal against her drug-smuggling conviction in Russia cnn.it/3dz5Mba 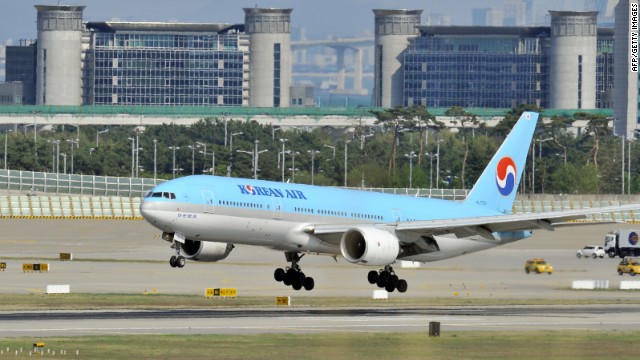 A Korean Air jet makes a landing at Incheon International Airport, west of Seoul, on Wednesday.
May 3rd, 2012
12:26 PM ET

North Korea has been busy for the past week, trying to jam the navigation signals going to civilian aircraft over South Korea, according to reports in South Korean media.

The jamming began April 28, according to a report from Dong-A Ilbo.

The planes have been able to use other systems to keep on their courses, according to the reports.

The planes affected were either taking off or landing at Incheon or Gimpo international airports or flying over the central region of the country, according to the reports.

The jamming signals were coming from the Kaesong area of North Korea, Chosun Ilbo reported, citing a staffer at the Korea Communications Commission.

The jamming comes after North Korea threatened to initiate "special actions" aimed at destroying the South Korean president and his government.

North Korean armed forces will use "unprecedented peculiar means and methods of our own style" to carry out the actions, the official Korean Central News Agency said in a report.

11:00 pm ET August 13, 2022 RETWEET
@colbyhall Yes BUT he experienced being in hiding for a long time. ThatŌĆÖs what makes this so shocking. After everyotwitter.com/i/web/status/1ŌĆ”hsIQ
sarasidnerCNN

2:53 pm ET August 12, 2022 RETWEET
After being in hiding for years, living under constant threat of death simply for words he wrote years ago, ArthurŌĆtwitter.com/i/web/status/1ŌĆ”ve
sarasidnerCNN

2:46 pm ET August 12, 2022 RETWEET
This is a good explanation of the range of nuclear weapons documents that may be among the items seized by the FBI.ŌĆtwitter.com/i/web/status/1ŌĆ”Zc
sarasidnerCNN

8:38 am ET August 12, 2022 RETWEET
@KarenAttiah Happy Birthday. And you look tough as nails! Get it!
sarasidnerCNN

LondonŌĆÖs Heathrow Airport has extended its passenger cap until the end of Octobercnn.it/3C8GNG0Eb
cnni

5:15 am ET August 16, 2022 RETWEET
Iran has sent its response to a European Union proposal to revive the 2015 nuclear deal, as the chief adviser to neŌĆtwitter.com/i/web/status/1ŌĆ”OK
cnni

4:45 am ET August 16, 2022 RETWEET
Award-winning author Salman Rushdie is awake and "articulate" in his conversations with investigators as he remainsŌĆtwitter.com/i/web/status/1ŌĆ”nb
cnni

4:18 am ET August 16, 2022 RETWEET
More than a decade since it broke ground, the long-awaited Taipei Performing Arts Center has opened to the public wŌĆtwitter.com/i/web/status/1ŌĆ”lX
cnni