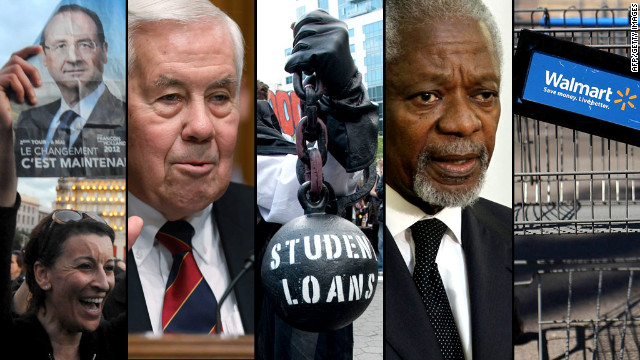 Keep an eye on how stock markets react this week as investors digest the results of two key elections in France and Greece that might signal changes in how Europe handles its 3-year-old debt crisis.

With Francois Hollande defeating incumbent Nicolas Sarkozy in today's French presidential runoff, questions will be raised about whether France will continue to commit to the kind of spending cutbacks that other European nations have deployed to battle the debt crisis. Hollande campaigned on the need to focus more on economic growth to reduce public debt, as opposed to austerity, CNNMoney's Hibah Yousuf reports.

Meanwhile, Sunday's parliamentary elections in Greece will help shape a ruling coalition that could affect the course of austerity measures there - measures that outside lenders had imposed in return for keeping the nation's finances somewhat afloat and ensuring Greece could keep the continent's common currency, the euro. The austerity measures have led to cuts in jobs, wages, pensions and benefits, and some parties were gaining traction with anti-austerity messages.

END_OF_DOCUMENT_TOKEN_TO_BE_REPLACED

A U.S. Army captain in Afghanistan did not indicate any unease when he suddenly fell forward while on a video chat with his wife, who then spotted what appeared to be a bullet hole in a closet behind him, the wife said Sunday.

Susan Orellana-Clark's husband, Capt. Bruce Kevin Clark, died last week while serving in Tarin Kowt, about 85 miles (140 kilometers) north of Kandahar. His wife's account offers new detail about what she saw happen from some 7,500 miles away, while also raising fresh questions as to how he died and why, according to her, it took two hours for anyone to come to his aid.

The wife said in a statement that, when the two were chatting on Skype last Monday, "there was no sign that Capt. Clark was in any discomfort, nor did he indicate any alarm."

Then, Clark was "suddenly knocked forward," the wife said. Orellana-Clark said she saw what she described as a bullet hole behind her husband, as did several other individuals - one of them a military member - who came over and could still see the scene over the continuing Skype session.

"After two hours and many frantic phone calls by Mrs. Clark, two military personnel arrived in the room (in Afghanistan) and appeared to check (Clark's) pulse, but provided no details about his condition to his wife," the statement said.

A U.S. military official with knowledge of the investigation conducted in Afghanistan said no wounds were found on the body. The cause of death is pending while authorities await autopsy and toxicology results, according to the official, who spoke on condition of anonymity because the case is still under investigation.

A senior operative of al Qaeda in the Arabian Peninsula wanted for his role in the USS Cole bombing was killed by an airstrike in Yemen on Sunday, the Yemeni Embassy in Washington said.

Fahd al Quso, 37, was killed in Shabwa province, according to the embassy.

In addition to being one of the most-wanted terrorists in Yemen, the FBI had offered a $5 million reward for any information leading to al Quso's capture.

Al Quso was indicted by a federal grand jury in New York in 2003 on 50 counts of terrorism offenses for his role in the October 12, 2000, bombing of the USS Cole in Aden, Yemen. The bombing killed 17 U.S. sailors.