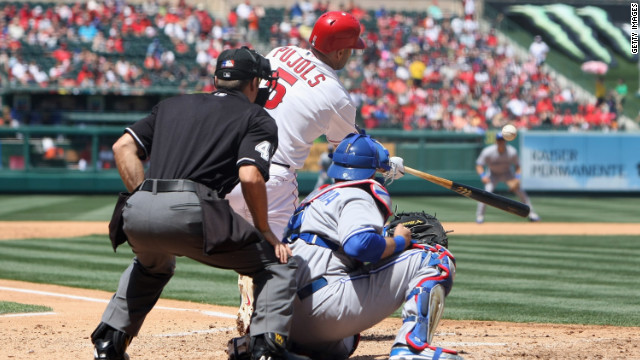 Albert Pujols hits his first home run of the season for the Los Angeles Angels on Sunday in Anaheim.
May 7th, 2012
06:24 AM ET

Sunday was a triple play of surprises in Major League baseball.

First, Albert Pujols homered. No surprise for someone who's hit 446 home runs in a 12-year career, you say? Well, Pujols' homer was his first as a player for the Los Angeles Angels and his first in 110 at bats, a career-long homer drought for the former St. Louis Cardinal who signed a 10-year, $240 million contract with the Angels during the winter.

The two-run blast ended up accounting for the winning runs as the Angels beat the Toronto Blue Jays 4-3 in Anaheim, California.

"I'm blessed that I had the opportunity to do it here in front of the fans," said Pujols after the game, according to a report in the Orange County Register. "They were being patient and waiting until the last couple of days, when I heard some boos. ... I was not performing the way everyone was expecting." 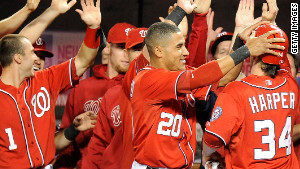 The 19-year-old Harper stole home in the first inning against the Philadelphia Phillies, becoming the first teenager to steal home in a Major League game since 1964, the Washington Post reported. It was also Harper's first stolen base in the big leagues.

It came after Phillies pitcher Cole Hamels hit Harper with a pitch to put him on base. Harper advanced to third on a Jason Werth single before swiping home.

Hamels admitted later he hit the rookie on purpose.

"I was trying to hit him," Hamels said, according to a report on MLB.com. "I'm not going to deny it. That's just ... something that I grew up watching, that's what happened, so I'm just trying to continue the old baseball. I think some people kind of get away from it."

And Harper seemed to be OK with that.

"He is a great guy, great pitcher, he knows how to pitch, he is an All-Star. It's all good," Harper was quoted as saying on MLB.com.

In the end, Hamels and the Phillies won 9-3. 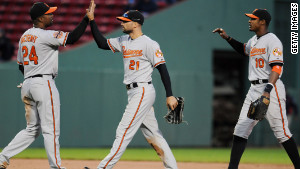 Baltimore Orioles players celebrate after completing a 17-inning victory over the Boston Red Sox on Sunday.

And Sunday's third surprise came during the 17-inning marathon between the Baltimore Orioles and Boston Red Sox at Fenway Park.

The winning pitcher in the six-hour, seven-minute marathon was Baltimore first baseman Chris Davis, who hadn't pitched in any competition in six years, when he was in junior college, according to the Baltimore Sun.

Davis took the mound in the 16th inning after the Orioles had used seven other relief pitchers in the game. He gave up two hits, struck out two and walked one in two innings, picking up the victory when Adam Jones hit a three-run homer in the top of the 17th.

“I'm like, sweet,” Davis said, according to the Sun report. “I get to try something different today because hitting ain't working.” Davis was hitless in eight at-bats in the game. He struck out five times.

And if that's not strange enough, the losing pitcher, who gave up Jones' homer, was Darnell McDonald, a Red Sox outfielder forced to pitch when the Red Sox depleted their relief corps.