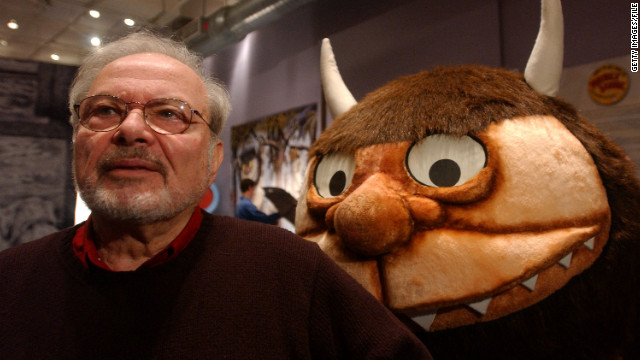 Maurice Sendak, author of 'Where the Wild Things Are,' dead at 83

[Updated at 10:34 a.m. ET] Maurice Sendak, author of the classic children's book "Where the Wild Things Are," died from complications after a stroke on Tuesday, said Erin Crum, a spokeswoman for HarperCollins Publishers.

Sendak illustrated nearly 100 books during a 60-year career, winning dozens of accolades as he endeared himself to generations of children reared on his fanciful stories. One critic called him "the Picasso of children's literature." Former President Bill Clinton called him the "king of dreams."

Born in Brooklyn the son of Polish immigrants, Sendak grew up to take a few night classes but largely taught himself as an artist.

He is best known for his book, "Where the Wild Things Are." It tells the story of a boy named Max, who dresses in a white wolf costume and escapes his life at home by sailing to a remote land, where he discovers wild things who roar their terrible roars and gnash their terrible teeth.

HarperCollins: Sendak speaks about "Where the Wild Things Are"

The book stirred controversy when it was first published in 1963. Many librarians initially feared it would disturb children, although it has become a timeless classic well-stocked in bookstores and libraries around the world.

Sendak received the Caldecott Medal for "Where the Wild Things Are" and was known for other favorite children's classics, such as "In the Night Kitchen," "Chicken Soup with Rice," "Alligators All Around," and the "Little Bear" books. He won the National Medal of Arts, the National Book Award, the Hans Christian Andersen Medal and the Laura Ingalls Wilder Award, according to Harper Collins Publishers.

We can think of no better way to pay tribute to Sendak than through his own memorable words.

Sendak recently did an interview with Stephen Colbert and was also the subject of an HBO documentary as well as a DVD by the Rosenbach Museum & Library in Philadelphia.

Watch the videos below for more on the legendary children's author and leave your memories of Sendak and his books in the comments below.

ColbertNation.com video: Sendak on the complexity of children and the simplicity of Newt Gingrich

ColbertNation.com video: Sendak on the state of children's literature