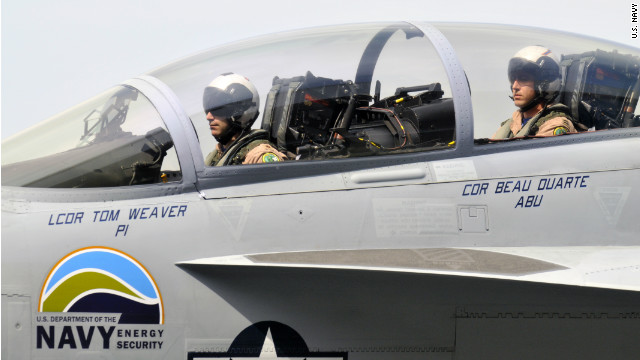 The U.S. Navy for the first time will demonstrate what it calls a Great Green Fleet, a carrier strike group operating in large part on nonfossil fuels, during a larger, 22-nation exercise this summer.

The Navy’s two-day demonstration, which will happen during the biennial Rim of the Pacific exercise around Hawaii from June 29 to August 3, is part of its plan to send such a strike group on a regular, months-long deployment in 2016, Navy Secretary Ray Mabus said on Wednesday.

It’s also a step in the Navy’s plan to meet at least half of its energy needs - on shore and afloat - with nonfossil fuels by 2020, Mabus said.

“(This summer’s demonstration) will focus on the fact that we are well down the path of meeting these goals,” Mabus said.

The blends, of a kind not derived from food stocks, already have been tested on ships and aircraft, but the demonstration is meant to show that an entire strike group can operate together on these fuels, Mabus said.

Navy officials haven’t yet determined how many ships and aircraft will be involved in the demonstration, Navy Lt. Richlyn Neal said. But a carrier strike group can involve a number of vessels, including a guided missile cruiser, a destroyer and a frigate.

The Navy wants to reduce its reliance on fossil fuels in part because the market is subject to price and supply uncertainties, with much of the fuel originating in volatile or potentially volatile parts of the world, Mabus said.

For 2012, the Defense Department is spending $3 billion more for fuel than it had budgeted, because prices rose faster than expected, Mabus said. More certainty is needed so that surprise cuts won’t be made in operations, such as training, or capital expenses such as shipbuilding, he said.

“We’re subject to price shocks and supply shocks, and this is a military vulnerability that we want to eliminate to make us a better military force,” Mabus said. “... I think that both the Navy and the Marine Corps have really embraced the notion of getting off fossil fuels to the maximum extent possible, because ... it makes us better war fighters.”

The demonstration is just one piece of the 36-day Rim of the Pacific  event, which the Navy says is the world’s largest international maritime exercise.

More than 25,000 personnel from 22 nations’ militaries are expected to participate in the exercise, which will include exercises in disaster relief, combat, counterpiracy and other operations, the Navy says.

[Update, May 15, 3:55 p.m. ET] The Navy has announced the ships that will take part in the Great Green Fleet demonstration.

Navy: List of all of all ships, aircraft scheduled to participate in larger RIMPAC exercise