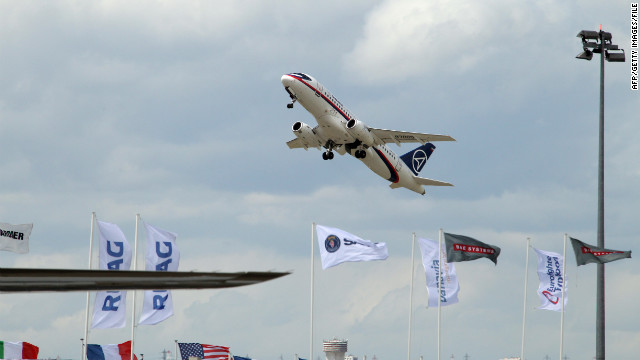 The jet was on a demonstration flight that should've lasted 30 minutes, taking off and expected to land again in Jakarta's Halim airport. About 46 people were onboard he said.

National Search and Rescue Agency official Gagah Prakosa said on Metro TV that there was an initial search by air that's been suspended because of darkness. A ground search continues.

[Updated at 7:24 a.m. ET] Russia's newest civilian airliner disappeared Wednesday from radar screens during a demonstration flight in the Indonesian capital, Jakarta, state-run Ria Novosti news service reported. There were 44 passengers on board.

The pilots requested permission to descend from 10,000 feet to 6,000 feet, air traffic controllers said. After that, all radio contact was lost.

The plane began making its descent but vanished from radar screens at 6,200 feet in a mountainous area.

By the time the plane was due to return it should have burned up its fuel, RIA Novosti said.

The Sukhoi Superjet-100 airplane arrived in Jakarta as part of a demonstration tour of six Asian countries. It had been to Myanmar, Pakistan and Kazakhstan, and was due to visit Laos and Vietnam after Indonesia, RIA Novosti said.
Sukhoi manufactures military aircraft and is known especially for its fighter jets. Its civilian aircraft is narrow-bodied with a dual-class cabin that can transport 100 passengers over regional routes.