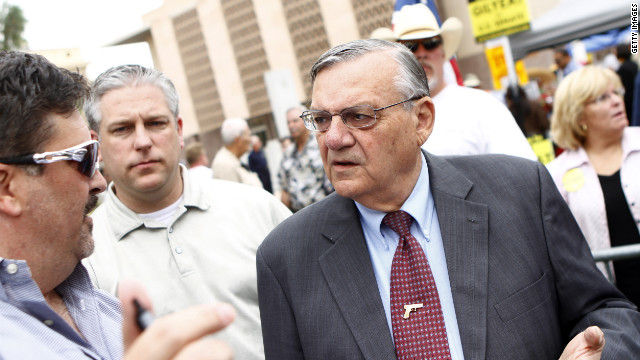 Overheard on CNN.com: 'I stand with Joe Arpaio,' reader says about lawsuit

"They're using me for the Latino vote, showing that they're doing something, taking on the sheriff over an alleged racial profiling," Arpaio told reporters in Phoenix. Our readers had varying takes on the controversial sheriff, illegal immigration and Arizona in general.

Readers debated whether the federal government should be getting involved.

Tr1Xen: "I stand with Joe Arpaio on this one. Illegal immigration should be fought vigorously, and I applaud the State of Arizona and the Maricopa County Sheriff's Department for taking that fight much more seriously than the Obama administration has. Heck, the Obama administration found fault in Texas' recent legislation requiring registered voters to provide photo ID, claiming that it discriminated against Latinos because they disproportionately lack photo identification (even though they are every bit as eligible to obtain photo identification, provided they are here legally). By the way, as a Texan, if that legislation is overturned by the federal government or isn't in effect on Election Day, I plan to wear a name tag with someone else's name on it when I go to vote. I'll tell them my correct name and to just ignore the name tag on my clothing. I urge others to do likewise! :)"

NoTarOnBeach: "Then you stand with a criminal. If you are OK with the police working outside the laws, then don't complain when the police abuse carries over to you."

19volks71: "Thank you. The federal government has no business in county level operations."

These people spoke out against Arpaio.

Ed Campbell: "Is there anyone in Arizona government who actually cares about civil rights?"

katepig: "Doesn't look like it does it. I'm from Arizona, but I've escaped. Joe Arpaio is one of the most corrupt sheriffs in the U.S. This guy is such a profound scumbag, I'm glad they're finally taking some action in regard to his vile behavior. If he and Jan Brewer were permanently removed from service, there would just be 100 more racist rednecks to take there place. Political buffoonery is par for the course in AZ."

These commenters wrote in support of Arpaio.

Tjscott: "So let's get this straight. Arizona has one of the highest immigration problems in the United States with the VAST majority of these illegals being Hispanic. Key words being illegal and Hispanic. Now, we're going to sue the person we put in charge of enforcing laws in a particular county of Arizona. The circus act that is the U.S. Justice Department is going to sue the guy who is supposed to get rid of people breaking laws (hence, 'illegals' in the earlier portion of this note), sending a clear message that you shouldn't actually arrest the grossly overpopulated illegal Hispanics. Wow. That makes no sense at all. I hope the terrorists succeed in taking out D.C. next time."

tgloege: "Leave Joe alone for crying out loud! If we had a sheriff like Joe in every county in the U.S., we'd have far fewer illegal aliens sucking up taxpayer money."

ProfLogie: "I've traveled through Maricopa County ... didn't stop or buy anything though ... Tried not to spend any money in the backwards state of Arizona."

Cat Nippy: "I once considered retiring in Arizona. No more. To paraphrase an old quotation, if I owned hell and Arizona, I would live in hell and rent out Arizona."

novax: "Yea, probably from the progressive state of California!"

What's your opinion of Arpaio? Share your opinion in the comments area below and in the latest stories on CNN.com. Or sound off on video via CNN iReport.