The Department of Homeland Security warns about the potential for violence from people involved in or opposed to thãtwitter.com/i/web/status/1ãÎVV

A federal judge has blocked the Biden administration from expelling migrant families apprehended at the US-Mexico bãtwitter.com/i/web/status/1ãÎCZ

Alex Murdaugh, the South Carolina lawyer whose wife and son were killed in June, turns himself in on charges relateãtwitter.com/i/web/status/1ãÎh0

A Colorado state probe launched in response to the death of Elijah McClain found Aurora police had a pattern of praãtwitter.com/i/web/status/1ãÎVi

President Biden plans to announce the US and UK are helping Australia acquire nuclear submarines in a new pushbackãtwitter.com/i/web/status/1ãÎhT 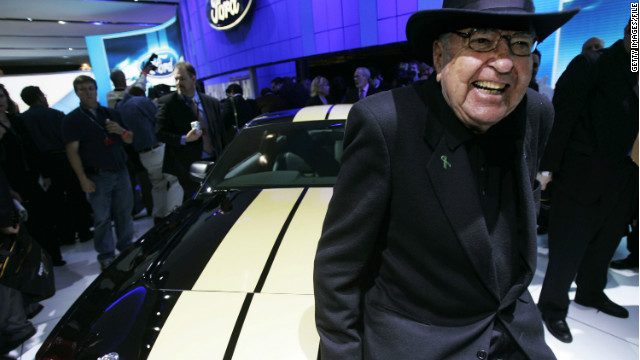 Shelby was more than a gearhead and racer. He was a visionary who put an American-designed, American-built muscle car on a global platform. His appeal was more than mere mechanics and was clearly demonstrated a few years ago when Ford unveiled the latest version of the Mustang on the eve of the Los Angeles Auto show.

Rather than a traditional reveal, the event took place in an airplane hangar at the Santa Monica airport. Instead of crowd of jaded automotive reporters, the stands were filled with Mustang enthusiasts who had been gathering all day for the event. The parking lot was filled with their cars, fully restored, polished to perfection and displayed like new children at a family gathering.

As the new cars thundered onto the floor, the faithful cheered until their lungs hurt. But the biggest cheer was reserved for Shelby, who was greeted as a near-deity when he rode in seat in the latest Mustang. Afterwards he patiently signed autographs, answered questions in a soft Texas drawl and walked among the rows of Mustangs parked in the lot.

Shelby was also a fixture at the Barrett Jackson auction of Classic Cars in Arizona. His presence on the stage there was considered the automotive equivalent of a papal audience. His touch on a vehicle was like rubbing against a saint.

Where have all the heroes gone? Mine is somewhere smiling and trying to figure out how to make an angelãs chariot do zero to 60 in less than 4.8 seconds.

9:00 am ET September 17, 2021 RETWEET
The government of Philippines President Rodrigo Duterte said it will not cooperate with an International Criminal Cãtwitter.com/i/web/status/1ãÎdc
cnni

8:45 am ET September 17, 2021 RETWEET
The remnants of former Hurricane Nicholas continue to slowly drift across the South, while an atmospheric river eveãtwitter.com/i/web/status/1ãÎBx
CNNweather

8:10 am ET September 17, 2021 RETWEET
The scene, captured by a quarantine hospital nurse at the epicenter of China's latest Delta variant outbreak, grippãtwitter.com/i/web/status/1ãÎog
cnni

7:48 am ET September 17, 2021 RETWEET
"Go and get that mouse!" CNN's @bianca_nobilo met a feline friend while interviewing Speaker of the UK House of Coãtwitter.com/i/web/status/1ãÎpn
cnni