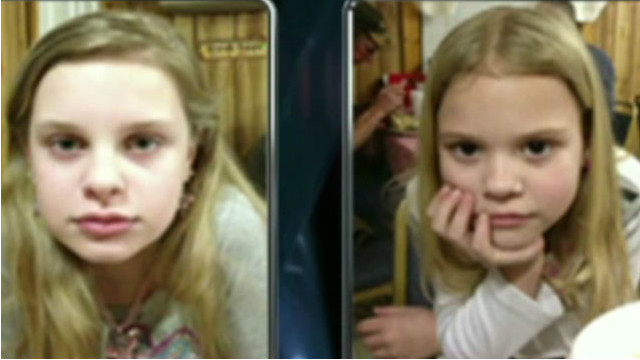 [Updated at 10:45 a.m. ET] Police have arrested three more people in their investigation of the kidnappings of Jo Ann Bain and her daughters, a law enforcement source said Friday. The arrests are for making a false statement and illegal possession of a firearm, the source said. Bain and one daughter were found dead several days ago. Two other daughters were found alive Thursday night.

Also, a law enforcement source said Bain and her oldest daughter were strangled to death.

[Posted at 10:15 a.m. ET] A tip from a caller led the FBI to the place where fugitive Adam Mayes shot and killed himself - all within sight of the two young girls he had been holding captive, the agency said Friday.

When investigators came upon Mayes, "the girls were on their stomach face down. They were close enough to see what was going on when he killed himself," FBI spokesman Jason Pack said.

Alexandria Bain, 12, and Kyliyah Bain, 8, were tended to by two female agents who rode with them in an ambulance to the hospital.

"They were scared and relieved," Pack said. "They were hungry and thirsty. They gave them water and we drove them out right away."

The tip authorities received was not that someone had spotted Mayes, but that there was an old logging cabin behind a church that might have power and would be a good hiding place.

The area had been searched before by agents, but it was searched again.

There is no evidence that Mayes and the girls actually used the cabin, but they were believed to have been in the area for a few days, he said.

"There was no shelter or anything. It looks like they were in the open woods," Pack said. "They were dehydrated and dirty, like they were here for several days."

Scientists have taken the first-ever photos of a glow-in-the-dark shark producing its own light. The kitefin sharkâ€twitter.com/i/web/status/1â€¦4Z
cnni

7:00 am ET March 6, 2021 RETWEET
At least 20 people were killed and more than 30 others wounded in a car bomb blast in Somalia's capital of Mogadishâ€twitter.com/i/web/status/1â€¦Ot
cnni