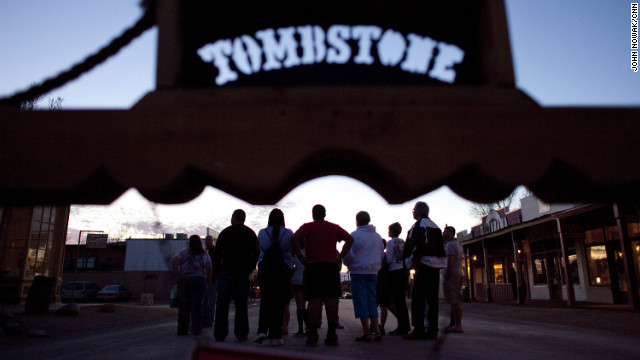 Overheard on CNN.com: Where do state and local laws end, federal authority begin?

Showdown at the H2O corral

A lot of readers said the federal government should not interfere.

TRussert: "This is totally and completely absurd. Let the town fix/improve their water needs and this will all be over. No species is going to suffer from this and the land will not be disturbed. In the meantime, all this bickering and letter of the law nonsense is just costing taxpayers unjustifiably. It's not like they want to drill for oil, which apparently has more success in being done on federal lands now, what idiocy. Doesn't anyone know that Federal Lands belong to the people? Someone with common sense step up and end this BS. We have real problems to deal with here. We don't need made-up ones on top of them."

Amegioa71: "This is the kind of thing that drives us crazy in the southwest ... the government won't lift a finger to control the border, but they'll prevent a town from using a wheelbarrow to repair its water line ... the government treats its people and their needs like they are the enemy."

Some wondered if there was something more going on here.

ryuujin: "Based upon the soap opera story presented here, there has got to a lot more than what has been explained. Therefore, don't blame the federal government until the WHOLE story is known. Start with following the money and why was the mayor who seemed to be getting the pipe fixed recalled?"

wolfpackbob: "Hopefully there will be some cool heads on both sides to find a reasonable balance. Surely damage to the land and the line by an instantaneous 500 years of erosion qualifies for some give-and-take on both sides. Someone needs to manage the lawyers on both sides."

Kodes100: "Shouldn't some common sense prevail here? Both of the main objectives can be achieved without this turning ugly because of politics. Get real. Tombstone can have water and the environment can remain safe!"

LtMDF20: "Common sense should prevail ... but unfortunately when the federal government is involved they bring no sense whatsoever. It is a no-brainer to allow the proper equipment to be brought in and get the problem fixed quickly and then get out. This mentality of protecting the environment at all cost is just stupid. You can have rules to protect it but also allow for common sense issues to be resolved. Just because repairs are made with the proper equipment in no way means that the area is open to other things like drilling or construction. that is just stupid. People never cease to amaze me with their ignorance."

Some are just sick of it.

PlayNice: "Let them fix their own water line, end of story. This has nothing to do with Obama, it's federal bureaucratic bs which knows no party limits – morons spring up all on their own."

CorndogsFTW: "The law is the law. What good is the law if you do not follow it? Then we would be having all of those despicable gay people getting married."

Speaking of marriage, a big states' rights debate this week has taken place about the issue of same-sex marriage.

Should the issue belong to the states or federal government? These readers disagreed.

clarkkent09: "All Obama said is that, while he personally supported the gay marriage, it should be a state issue, which is what Republicans are saying as well. It's all election-time smoke and mirrors."

Poitay25: "You know, they said that the Civil Rights Movement should be a 'state issue' as well. When a segment of the population is being treated with inequality, it is as federal as it gets. Hopefully Obama will take his new found evolution and step up after he gets re-elected."

One person opined that the federal government has a role in the decision.

The following commenter discussed the interaction between the "full faith and credit" clause  in the U.S. Constitution, which says that states should honor each others' laws by default, and the Defense of Marriage Act. The latter allows states to refuse recognition of a same-sex marriage that took place in another state. Therefore ...

jb226: "It is pretty much the only thing standing in the way of one state determining that gay marriage is legal everywhere in the country. ... That means that they (states) have a HUGE amount of authority on gay marriage. Will Obama try to repeal it? I doubt it. Politicians are too gutless. I think politicians on both sides understand that gay marriage is ultimately going to be permitted by the courts. Republicans get to decry activist judges and throw up their hands in disgust without actually being forced to vote against gay rights, while Democrats get the victory they want without actually having to defend gay marriage itself. For an inevitability, that's actually a really good outcome for both of them. But to say the federal government has no authority about (gay) marriage is false. In fact there are even more ways they have power over it (such as if or how they defend it in court - which Obama has ordered the Justice Department not to do), but this post is long enough as it is so I'll leave them for another day and another commentator."

Religious definitions of marriage vs. legal marriage has been an interesting question pondered by some.

Cameron Robb: "If marriage is a religious event, then the doctrine of the church decides who can and cannot be married. This is a private function and is protected by the Constitution.  However, a legal marriage in America is a contract authorized by the state.  It contains allowances for tax relief and numerous other benefits. Any citizen of America has the constitutional right to access this arrangement. There are plenty of religious people in America, but America is not a religious country. Religious doctrine has no legal standing against the Constitution in the public arena."

Timeline of an 'evolution': How Obama made his same-sex marriage decision

Many readers said they believe it's a no-brainer that the issue is being fought out in the states.

Gliese581gg: "I like how the Right diverts the attention to why Obama made the announcement. Instead of having to be engaged as to why they disagree with the opinion, they can hold off their disrespect for the principles this country was founded and fellow US citizens until after the election. 'And saying let the states decide is the template answer from a Republican for any question.' Apparently it's now the template for a Democrat as well ..."

FlotsamJetsa: "Reality is it still depends on the individual states, so Obama didn't have to go out onto too big a limb. People who hated Obama have an issue that they can latch onto if they wish. People for him do the same. Political forces wash here."

Zack Morris: "I don't see any discriminatory laws. Even Obama himself agrees that states have the ability to do just as NC did last week, and define marriage for themselves. Do you disagree with Obama? He doesn't think it is discriminatory, why do you?"

Now, switching back to Arizona again, the issue of federal authority also pops up in the case of Maricopa County Sheriff Joe Arpaio, who has spoken out against a civil lawsuit filed by the Justice Department.

Is the federal government obstructing the states?

hody45d: "Aside from any accusations and whether they are true, why do we have all of these inmates that can't speak English? The Federal government continues to ignore the problem on our southern border and then fights any attempt by states to try to solve the problem themselves. How did the DOJ become so corrupted? That is one department that should not have appointees placed by the president."

Is this an issue of civil rights, and can it be considered under federal authority?

DustyJB: "Federalism is not the legal issue in this case. Section 5 of the 14th amendment and the commerce clause gives Congress plenary authority to create and enforce civil rights laws. Congress chose to enact and enforce civil rights laws precisely because southern police officers refused to enforce their own criminal laws or chose to enforce those laws discriminatorily, i.e. white prosecutors refused to prosecute a white person for killing a black person. Federalism is a political issue the sheriff raised to mitigate his culpability just like white Southern police officers and prosecutors raised the federalism issue to mitigate their culpability when the federal government sued them for civil rights violations in the '60s. The federal government is not suing the sheriff because he enforced both state and federal law when he decided to arrest illegal immigrants. The government sued the sheriff because he treated Hispanic prisoners differently than non-Hispanic prisoners precisely because they were Hispanic."

MosinNagant1: "The interstate commerce clause is grossly overused by the Federal government. What do civil rights have to do with commerce? The Federal government does not have the authority to go to any sheriff's office and demand "independent monitors" be put in that office without proving in a court of law any wrong doing has happened. It is a usurpation of the will of the people in that county. That is my whole point here."

Some said there's no way the politicians could understand.

m4xP0w3r: "Unless you have lived in Arizona, you really have no room to criticize Joe. There's a lot of tough, complicated problems to deal with in AZ that folks up north don't understand."

Or is Arpaio already going along with the feds?

northerncal10: "The sheriff is only enforcing federal law."

What do you think about federal, state and local authority? Who should step in, when? Share your opinion in the comments area below and in the latest stories on CNN.com. Or sound off on video via CNN iReport.