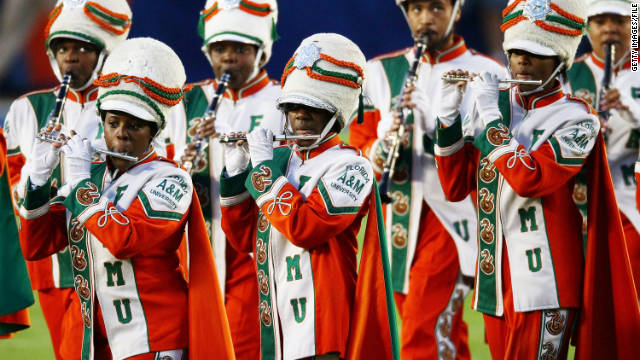 FAMU President James Ammons has decided to suspend the marching band for the next school year.
May 14th, 2012
11:37 AM ET

The Florida A&M University marching band will remain suspended through the 2012-2013 academic year while the school works to set new rules following the fatal hazing of a band member, university President James Ammons said in a conference call Monday with trustees.

"I was heavily influenced by the need to be respectful to Robert Champion's family as well as the other victims," Ammons said. " A young man lost his life and others suffered serious injuries."

Authorities say Champion, 26, was badly beaten during a hazing incident on a band bus after a football game in Orlando last November. He died within an hour of the attack. Others hazing incidents that resulted in injuries to band members also have been reported.

Ammons said the band must be restructured and the "limited time frame" between now and autumn is not enough time to accomplish that.

7:16 pm ET December 1, 2022 RETWEET
RT @tribelaw: This defeat for Trump is a triumph for the rule of law. DOJ has succeeded in convincing the unanimous Circuit Court that Juâ€¦
susancandiotti

9:40 am ET December 1, 2022 RETWEET
@EmmaDanielle4 @CNN Iâ€™m still here. Some of my wonderful, smart, hard working, caring, and most thoughtful colleagues are not.
sarasidnerCNN