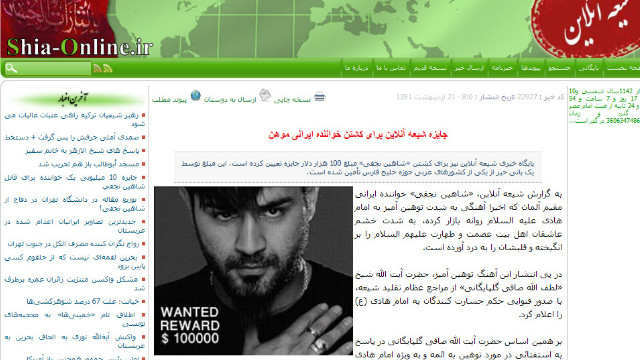 "According to article 513 of IslamŌĆÖs penal code: Anyone who insults the sanctity of Islam, anyone of the great prophets, the Imams, and Sadigheh Tahereh (the prophetŌĆÖs daughter) should be executed," the post says.

"This fatwa does not represent the government of Iran,ŌĆØ Zarei is quoted as saying. ŌĆ£This is done by a religious group in our society.ŌĆØ

A group of seven US senators met on Monday with Ukrainian President Volodymyr Zelensky in the capital of Kyiv amidŌĆtwitter.com/i/web/status/1ŌĆ”zX
cnni

7:13 pm ET January 17, 2022 RETWEET
The parents of Austin McEwen, one of the six victims killed after a tornado pummeled an Amazon warehouse in EdwardsŌĆtwitter.com/i/web/status/1ŌĆ”dQ
cnni

6:41 pm ET January 17, 2022 RETWEET
Watch how noodles, rice and burgers are prepared and delivered by robots at the Beijing Olympics Village.ŌĆtwitter.com/i/web/status/1ŌĆ”ov
cnni