The CNN Daily Mash-up is a roundup of some of the most interesting, surprising, curious, poignant or significant items to appear on CNN.com in the past 24 hours. We'll top it with a collection of the day's most striking photographs.

Michael Anthony is the chef-partner at New York City's Gramercy Tavern. Last week, he received the James Beard Award for Best Chef NYC,Ā  but he almost didn't live to see that day. Here's what he said about food's role in healing after his open heart surgery:

With the help of these restaurant folk and their deliveries, I eased my way back in to being myself again by tasting each expression: barley and basil brought solidarity in tough times, kale and beet salad reconnected me with the garden, chicken fricassee invoked nostalgia, parsnip soup acted like a familiar handshake, poached lemon char sparked dreams, chocolate chip cookies felt just like a pat on the back.

No help for dying eagle?

People in a Cape Coral, Florida, neighborhood are distraught after watching a bald eagle die before their very eyes, CNN affiliate WFTX reports. The young bird came out on the losing end of a fight, landing in a vacant lot in the neighborhood. "I came up to it. It didn't move. It was frightened, and it was obviously injured," Ray Christensen told WFTX. Neighbors called police for help and are not satisfied with the response.

An accident on the diamond may have saved the life of a baseball coach in suburban Chicago. CNN affiliate WLS reports that Elk Grove High School coach Steve Lesniak was hit by a line drive at practice. When he went to the hospital, a much bigger problem was discovered.

Man explains why he made video that went viral

Shane Bitney Crone's touching video has been viewed on YouTube more than 2 million times. He tells CNN the story behind the story.

iReporter, 89, has had it up to here with nasty politics

World War II U.S. Army veteran Andrea Bacigalupa is disgusted with the state of American politics and feels that he isn't represented by either major political party. Here's what he said on his iReport post:

I hold little hope that this country will regain a sense of civility, at least, among politicians and big business. I presume that there will always be isolated individual citizens who practice civility.

A study finds almost one-third of people have experienced an episode of sleepwalking, and 1% somnambulate two or more times a month. That news was an eye-opener for many readers, some serious, some not so much.

Sleep walking can be associated with bad sleep apnea. In my case I was a chronic sleepwalker since childhood. When I was finally studied in a sleep lab, they said I had no REM sleep at all. During REM sleep the muscles are frozen and dreams occur harmlessly. Without REM sleep, the person may act out their dreams, as I did. When I got a dental device and began side sleeping, my sleepwalking also stopped. I had the good fortune to own a house 500 feet from the road. I never sleep walked further than halfway. It is a frightening thing, another reason why sleep disorders should be diagnosed and treated.

Apparently I go stand in the bathroom and shuffle things on the counter around loudly enough to wake up my husband. Good stuff, I tell ya. This is not the 1% I'd like to belong to. 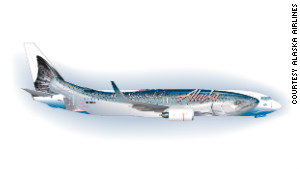 It's a bird! It's a plane! It's ... a fish? Alaska Airlines and the Alaska Seafood Marketing Institute on Monday unveiled the world's largest king salmon. A Boeing 737-800 is being painted to look like a 129-foot-long king salmon, CNN affiliat KCPQ reports. The new "Salmon-Thirty-Salmon II" features fish scales on the winglets and a salmon-pink "Alaska" script across the fuselage. KCPQ has a picture.

On the horizon: Medal of Honor, Cannes Film Festival

President Barack Obama will award Army Spec. Leslie H. Sabo Jr. the Medal of Honor on Wednesday for conspicuous gallantry.Ā  Sabo will receive the honor posthumously for his heroic actions in combat with the 101st Airborne Division on May 10, 1970, in Se San, Cambodia.

The Cannes Film Festival gets under way Wednesday in France and will run through May 27. Among the hot tickets will be director Andrew Dominik's "Killing Them Softly," starring Brad Pitt; Lee Daniels' "The Paperboy," starring Nicole Kidman, John Cusack, Zac Efron and Matthew McConaughey; and "Lawless" with Tom Hardy and Shia LaBeouf.

If the real-life DART succeeds in its mission, we may be able to chill out more when asteroids start coming too cloātwitter.com/i/web/status/1ā¦YD
cnni

5:45 am ET September 25, 2022 RETWEET
Millions of Cubans are expected to turn out to vote for or against a major overhaul of the islandās more than four-twitter.com/i/web/status/1ā¦b494
cnni

5:00 am ET September 25, 2022 RETWEET
Russiaās āpartial mobilizationā for its war in Ukraine is off to a chaotic start amid protests, drafting mistaktwitter.com/i/web/status/1ā¦qAJxXXr0
cnni

If the real-life DART succeeds in its mission, we may be able to chill out more when asteroids start coming too cloātwitter.com/i/web/status/1ā¦YD
cnni

5:45 am ET September 25, 2022 RETWEET
Millions of Cubans are expected to turn out to vote for or against a major overhaul of the islandās more than four-twitter.com/i/web/status/1ā¦b494
cnni

5:00 am ET September 25, 2022 RETWEET
Russiaās āpartial mobilizationā for its war in Ukraine is off to a chaotic start amid protests, drafting mistaktwitter.com/i/web/status/1ā¦qAJxXXr0
cnni