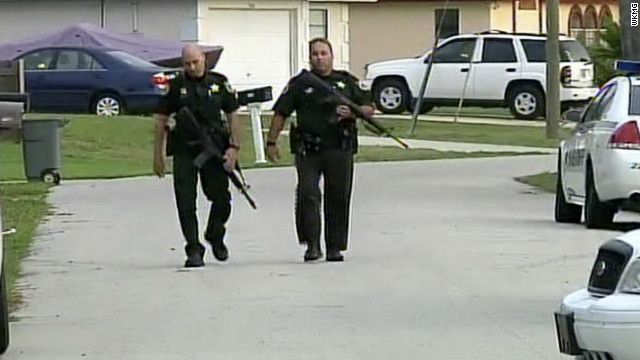 ‘I cried so much,’ schoolmate says after 4 kids slain

Friends of four Florida children who police say were fatally shot by their mother reacted with tears and stunned silence Tuesday when they found out their classmates were dead.

Student Malcolm Murray, a friend of slain teenager Jaxs Johnson, said the killings were announced over the loudspeaker Tuesday at Space Coast Junior-Senior High School in Cocoa, Florida, where Johnson and two of his siblings attended.

"It's unfair she had to take his life," Murray told CNN affiliate WKMG. "I cried so much I can’t cry anymore."

Some of the children went to a neighbor’s home to say that their mother was shooting them, but they returned to their house when Thomas called them back and Thomas shot them again, killing them, Brevard County Sheriff’s Lt. Tod Goodyear said, according to WKMG.

“After we found out who died at our school, no one really wanted to talk,” student Jacob Nelson, who sat next to Jaxs Johnson in history class, told CNN affiliate WESH. “It was just really hard to digest what really happened and how it happened.”

Goodyear said police don’t know of a motive in the shooting. Friends and court documents, however, revealed that Jaxs and his mother were having difficulties.

Jaxs was arrested in April on a domestic violence charge, accused of fighting with his mother when she tried to wake him up for school, WKMG and WESH reported. He was supposed to appear in juvenile court on Tuesday in connection with the case, according to WKMG.

Murray said Jaxs, when they last spoke, said things were getting better at home.

“(Jaxs) said everything was good in the family and they were getting back to the way they used to be, so for this to happen, I broke down, because I didn’t see it coming at all,” Murray told WKMG.

The children's father did not live with the family and was distraught after hearing of the killings, the affiliates reported.

Friends and relatives left a teddy bear, notes, candles and flowers outside the home on Tuesday, CNN affiliate CFN13 reported.

“We want people to know that they weren’t forgotten, no matter what happened today,” neighbor Tony Amador told WKMG.

"She just brought the classroom to life," Wratchford told CFN13. "The teacher loved her. She made everything else better.

“I had a class with Jaxs Johnson, too. He was in my team sports class, and he was also really fun.”

The victims’ schools said they made grief counselors available to students Wednesday.