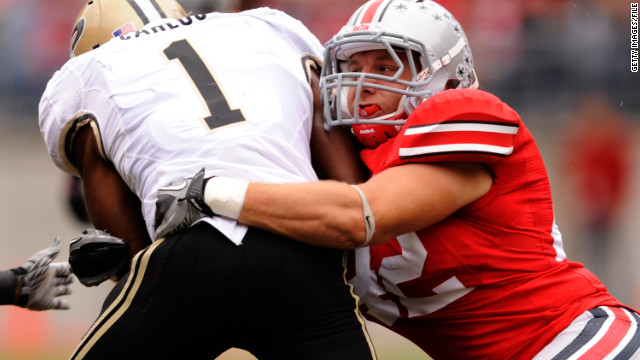 A former Ohio State linebacker said he is giving up his chance to make it in the NFL and instead will go to law school because of his concerns about concussions.

Andrew Sweat suffered three concussions while he played as a Buckeye in the Big Ten, including a serious one in the middle of his final year on the field for The Ohio State University.

But he began to feel better earlier this year, and, as an undrafted free agent, had a chance to try to nab a spot on the Cleveland Browns' roster.  As he prepared to head to the team's camp last week, he slipped and fell in the shower, causing the concussion symptoms to return.

It appears that was the final straw for Sweat, who said on Twitter he decided he had to choose his health over a possible shot in the NFL.

"When I fell, it scared me," Sweat told the Cleveland Plain Dealer. "Football is not worth my health. It's really important to me that I'm able to have a family and a life after football. Football is a great game, but when you have a concussion like that, it's not worth it."

Sweat's decision might not normally garner too much attention. He was listed as 31st on the ranking of other linebackers who were entering the NFL draft. But it comes as the NFL weathers bounty scandals and concerns regarding rough hits, as well as allegations and lawsuits by more than 1,700 NFL players claiming that the National Football League hid the dangers of concussions from them. The attention to the  concussion issue has continued to grow and was again back at the forefront of discussion after NFL star Junior Seau committed suicide.

Sweat said that Seau's death and all of the controversy swirling around the NFL right now didn't play a huge part in his decision. It was more about how he personally felt and his own concern about whether it was worth it to risk another concussion.

"Sometimes people get lost in the game of football. They don't think about injuries, and they ignore things," he told the Cleveland newspaper. "I enjoy too many things. I'm too well-rounded to have critical damage to my brain and body."

Now, instead of hitting quarterbacks, Sweat will be hitting the books and preparing to enter his first year of law school. Sweat graduated from Ohio State with a degree in finance, was a three-time Academic All-Big Ten Conference selection, a four-time OSU Scholar-Athlete, and interned at Merrill Lynch, according to his Ohio State player bio.

It's clear that Sweat's got the brains to do fine with a career outside of the NFL. And while he's excited about the new chapter in his life, he is none too happy with how a few blogs, both legal and sports-related, took him to task over his decision.

Elie Mystal, a former lawyer, wrote on the blog Above the Law that he was posting about Sweat to try to help him "avoid making what could be the biggest mistake of his life."

Mystal suggested that Sweat should try out for the Browns instead of going to law school.

"I can’t know if Sweat’s decision is being partially motivated by all the media attention focused on the long-term health consequences of playing in the NFL. But I’d bet all the money in my pocket that Sweat has not been paying attention to the media coverage of the long-term professional and financial damage that can be done by going to law school…" Mystal wrote.

The former attorney also  mocked the schools to which Sweat had been accepted, saying they were "more like the Cleveland Browns of law schools" and begging him to reconsider his decision.  According to the Columbus Dispatch, Sweat was accepted at Pittsburgh, Duquesne, West Virginia, Florida and the University of Miami.

"It’s not like law school is going anywhere! Andrew Sweat can have his cake and eat it too," Mystal wrote. " He can take the short-term potential upside of trying to have an NFL career, and then go to law school when he’s done. Hell, he might even do better on the LSAT, since he evidently took the test while trying to play Big Ten football and suffering from concussions."

"It is, I suppose, a little easy to forget that NFL players make a lot of money. Yes, they subject their bodies and brains to untold ravages; yes, they're exploited by money-hungry owners; yes, they're largely deprived (unfairly) of the education and training needed to succeed after football—but they make a lot of money," the article on Deadspin said. "So, Sweat, listen up and learn that NFL players, as far as exploitation goes, have a nicer deal than graduates of second- and third-tier law schools, who leave with lots of debt and similarly scrambled brains."

Sweat responded to their concerns, tweeting that he was going to be just fine with a likely job in his father's law firm.

Patrick Giblin conned women all over the US. Now he's going to prison for 5 years. cnn.it/3uHURkM
cnni

11:30 am ET December 9, 2022 RETWEET
Pope Francis broke down in tears while talking about the war in Ukraine during an annual prayer at Rome’s Spanish Stwitter.com/i/web/status/1…cVHF
cnni

Patrick Giblin conned women all over the US. Now he's going to prison for 5 years. cnn.it/3uHURkM
cnni

11:30 am ET December 9, 2022 RETWEET
Pope Francis broke down in tears while talking about the war in Ukraine during an annual prayer at Rome’s Spanish Stwitter.com/i/web/status/1…cVHF
cnni