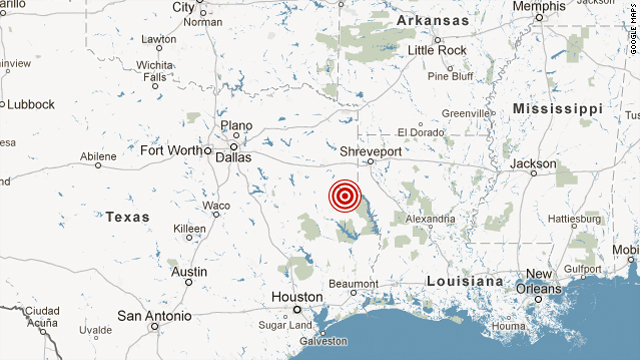 At least one building in Timpson showed damage, with a number of bricks falling to the street below, CNN affiliate KLTV in Tyler, Texas, reported.

Ollie Barrett told KLTV that bricks from her chimney came crashing through her roof.

"There was a loud rumbling noise and then there was a lot of crashing," she said. Her 52-inch, wall-mounted TV was crushed.

One woman was injured when she fell out of bed and cut her arm, CNN affiliate KSLA in nearby Shreveport, Louisiana, reported.

And the Shelby County sheriff's office had reports of broken windows from the temblor, dispatcher Karen Shield told CNN.

Thursday morning's earthquake was the third-strongest in East Texas history, KLTV reported, surpassed only by quakes in 1957 and 1964.

Cliff Frohlich, a University of Texas scientist, said it's possible the most recent quakes are related to energy production activity in the area.

"There are some injection wells in the part of the country where these earthquakes occurred," Frolich told CNN. "If they were very close to an injection well, that would suggest they were."

Injection wells are used in the disposal of dirty water from energy production, Frohlich said.

Frohlich said injection wells should not be confused with fracking, a process which involves injecting water, sand and some chemicals deep into the earth to crack shale rock, which frees oil and gas.